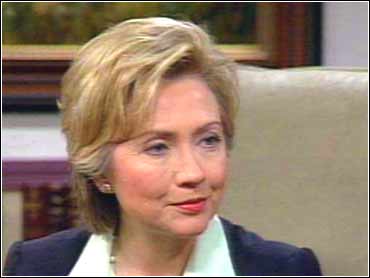 He can no longer practice law because someone paid him to alter a court document.

He suffered a brain disorder that led to memory loss and an addiction to phenobarbitol.

He wrote a letter to Hillary Rodham Clinton begging her forgiveness for saying things about her "without factual foundation." And he holds a divinity degree from a Baptist theological school.

He is Paul Fray, the man who's accusing Clinton of calling him a "Jew bastard" during an argument in 1974.

The accusation - contained in a new book, State of A Union: Inside the Complex Marriage of Bill and Hillary Clinton by Jerry Oppenheimer - has rocked Clinton's New York Senate campaign and become fodder for Web sites, newspaper headlines and cable TV news shows.

While other accusations - some sleazy, some unprovable - have sometimes been ignored by the Clintons and unreported by the mainstream press, this one spurred the first lady to action.

She unequivocally denied the allegation during an emotional press conference in the garden of her Westchester home. The president phoned a New York Daily News managing editor and called the accusation "crap."

Fray did not return several calls placed for comment. But he told the Fox News Channel on Tuesday that he'd like a "face-to-face" meeting with the first lady "and we'll get everything resolved and this matter will go away ... I don't want to adversely affect her race. I do not want to get me into a position where I said this to create problems for her."

Fray claims that Hillary Clinton made the comment in Fayetteville, Ark., on the night that Bill Clinton lost a Congressional election. Fray had worked on the campaign. He and his wife, Mary Lee, went inside a room with Bill Clinton and his then-girlfriend, Hillary Rodham, and an argument ensued. The fight has been described in a half-dozen Clinton biographies, but Oppenheimer's is the first to include Fray's assertion that Hillary Clinton used an anti-Semitic slur.

Fray holds a Master of Divinity degree from Southwest Baptist Theological School in Fort Worth, Tex., but he told Oppenheimer that his father was Jewish.

Another campaign aide, Neil McDonald, told Oppenheimer he heard the comment while standing outside the door. Efforts to reach McDonald on Tuesday were not successful.

Fray has a colorful past. On Oct. 6, 1974, the state Supreme Court of Arkansas accepted the surrender of his law license. Individuals typically voluntarily submit to such a procedure in lieu of having their licenses revoked by the state.

In 1978, Fray applied to have his license reinstated. In denying the application, the court's Committee on Professional Conduct wrote that Fray was altered a court document to erase a drunken driving conviction for a client and "stated that he did not recall accepting $500 for the serious impropriety."

"We are not satisfied that he possesses the good moral character necessary for a law license," the committee wrote. "The alteration of the court record occurred before he suffered the cerebral hemorrhage. The act demonstrates a basic lack of integrity."

Oppenheimer said Tuesday he was "completely 100 percent satisfied that the Frays and Neil McDonald are telling the truth." Oppenheimer has worked for The National Enquirer, the Philadelphia Daily News, the Washington Star and United Press International. He says he is a liberal who voted for Clinton in 1992.

Gail Sheehy, author of Hillary's Choice, said when she interviewed the Frays, Mary Lee Fray mentioned the anti-Semitic comment. Sheehy decided not to include it in her book because Paul Fray "skirted the issue. That's why I didn't use it. I realized that even he didn't back it up." She added that she found the Frays "only moderately reliable. They were kind of flaky."

Oppenheimer dismissed the loss of Fray's legal license as irrelevant. "That's what the Arkansas Bar is now considering about Bill Clinton too," he said.

The Arkansas Supreme Court is considering whether to revoke the president's law license on the grounds that he gave misleading testimony regarding the Monica Lewinsky scandal.

New York City Mayor Rudy Giuliani, who didn't have a lot of nice things to say about Hillary Clinton when he was running for Senate against her before dropping out of the race, spoke up for her Tuesday.

"What she did say or didn't say 26 years ago, I can't imagine it has any relevance today," he said. "I'm willing to accept her at her word."