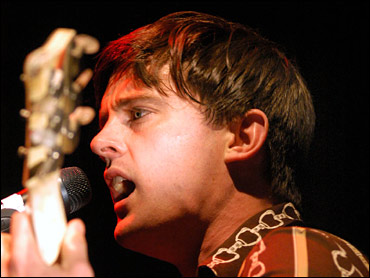 Scottish rockers Franz Ferdinand, whose debut album has been hailed by critics as a masterpiece of pop, won the prestigious Mercury Music Prize on Tuesday.

The Glasgow-based quartet was the favorite among the 12-strong shortlist to take home the award for their self-titled album.

But a shocked Alex Kapranos, the band's singer and guitarist, said they still didn't expect to win votes from the judges, who have been noted for dismissing favorites in previous years.

"We haven't got a speech or anything," Kapranos said at the award ceremony in London. "We're truly gobsmacked, it's fantastic and we're very chuffed, very honored."

"Every band (on the short list) deserved it more than we did," he added.

The $35,600 Mercury prize, now in its 13th year, honors the best album of the year by a British or Irish band. It is judged on talent and innovation rather than commercial sales and the winner can usually expect a surge in sales and publicity.

The panel of judges, made up of music experts and journalists, debated the contest right up until moments before the winner was announced late Tuesday.

Franz Ferdinand, named after the heir to the Austro-Hungarian empire whose assassination started World War I, has only released one album with a mere 11 tracks. But the band sells out all its shows and reviewers have lavished praise on their powerful guitar riffs, making the group the standard-bearer for Britain's "art rock" movement.

A Time magazine critic said the record was so good he nearly cried with joy. Entertainment Weekly called them "danceable and ferociously melodic."

The shortlist for the Mercury Prize is whittled down by judges from an original choice of 180 albums.

In recent years some have criticized the award for being willfully obscure and selecting "token" classical or folk acts, but this year there was no music from that genre nominated.