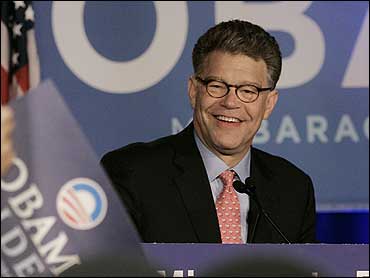 A Minnesota board on Monday certified results showing Democrat Al Franken winning the state's U.S. Senate recount over Republican Norm Coleman, whose lawyer promised a legal challenge that probably will keep the race in limbo for months.

The Canvassing Board's declaration started a seven-day clock for Coleman, the incumbent, to file a lawsuit protesting the result. His attorney Tony Trimble said the challenge will be filed within 24 hours. The challenge will keep Franken from getting the election certificate he needs to take the seat in Washington.

"This process isn't at an end," Trimble said. "It is now just at the beginning."

"Whether it is Florida or Minnesota, whether it is 2000 or 2009, it's very hard to get the courts to overturn the certified results of the election, especially two months after the election when so many people have worked so hard to try to get accurate figures," said CBS News legal analyst Andrew Cohen. "So I think Coleman's chances aren't very good and won't get much better the further up the appellate ladder he tries to go."

Franken, a former "Saturday Night Live" personality, ended the recount up by 225 votes, an astonishingly thin margin in a race where more than 2.9 million votes were cast.

"After 62 days of careful and painstaking hand-inspection of nearly 3 million ballots, after hours and hours of hard work by election officials and volunteers around the state, I am proud to stand before you as the next senator from Minnesota," Franken said Monday in brief remarks to reporters outside his downtown condominium.

Coleman's campaign said he would make an appearance Tuesday in Minnesota. He was in Washington on Monday.

The recount reversed the unofficial Election Day results, which showed Coleman with a 215-vote lead.

Franken made up the deficit over seven tortuous weeks of ballot-sifting in part by prevailing on challenges that both campaigns brought to thousands of ballots. He also did better than Coleman when election officials opened and counted more than 900 absentee ballots that had erroneously been disqualified on Election Day.

Coleman's lawyers have argued that some ballots were mishandled and others were wrongly excluded from the recount, giving Franken an unfair advantage. After a Minnesota Supreme Court decision went against Coleman earlier Monday — he had sought to add hundreds more rejected absentees from Republican-leaning areas — lead attorney Fritz Knaak said a lawsuit was inevitable.

Secretary of State Mark Ritchie was careful to note Monday that the board was simply signing off on the numbers found by the recount: Franken, with 1,212,431 votes, and Coleman, with 1,212,206 votes.

"We're not doing anything today that declares winners or losers or anything to that effect," Ritchie said.

All five members of the canvassing board — Ritchie, plus two state Supreme Court justices and two Ramsey County judges — voted to accept the recount results.

A lawsuit would extend the fight over the seat for months. Any court case would open doors closed to the campaigns during the administrative recount. They would be able to access voter rolls, inspect machines and get testimony from election workers.

The case would fall to a three-judge panel picked by Chief Justice Eric Magnuson of the Supreme Court. Magnuson served on the Canvassing Board, but declined to say Monday if he would remove himself from the selection process as a result. Magnuson was an appointee of Republican Gov. Tim Pawlenty.

The campaigns continued the political maneuvering that has marked the nearly two months of the recount.

"Former Senator Coleman has to make a decision," Elias said. "And it is a profound decision, one that he has to look into his heart to make: Whether or not he wants to be the roadblock to the state moving forward and play the role of a spoiler or sore loser or whether he wants to accept what was a very close election."

"The race in Minnesota is over," said Senate Majority Leader Harry Reid, D-Nev. He called the Republican efforts to continue challenging Franken's election "only a little finger pointing."

Trimble, meanwhile, said that irregularities in the recount mean there "can be no confidence" in the results. And he said Coleman didn't want any delay in filing a challenge.

Minnesota law doesn't allow the issuance of a final election certificate until legal challenges are settled, meaning the state will be represented only by Sen. Amy Klobuchar, a Democrat, when Congress convenes on Tuesday. Coleman's term expired Saturday.