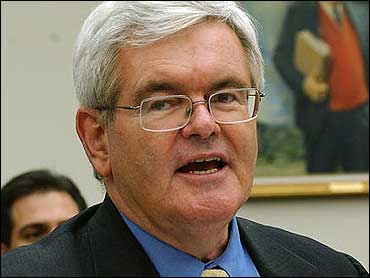 This column was written by Isaac Chotiner.

"It's just like they have become one giant whining windbag," Frank Luntz says to me when I ask his opinion of Republican leaders in Washington. Luntz may be the GOP's most recognizable and famous pollster, but he is none too happy with the current state of his party. "They are adrift and they are leaderless," he exclaims, his voice rising. "When they came into the House they held a press conference and I was just sickened. It was all complaints about process." His tone shifts to a higher pitch as he mimics a generic Republican lawmaker: "'We're not being allowed to offer amendments; we're not being allowed our time on the floor.' It was the worst sort of partisan whining."

Many in Washington might agree with this analysis, but Luntz is more than just any member of the establishment. In 1994, he not only helped write Republican House member Newt Gingrich's Contract with America; he was also responsible for its presentation to the public. Four years later, he advised Republicans trying to impeach Bill Clinton. And, over the last decade, his memos and ideas have been more influential and widely circulated than those of any other message guru. And yet, like other GOP stalwarts who helped usher in an era of conservative dominance, Luntz isn't happy with the results. From Gingrich to former Representative Dick Armey, it seems that, the closer you were to the Republican Revolution, the more despondent you are about what that revolution has become. For his part, Luntz is going farther than other GOP critics — literally. He recently bought a condominium in sunny Santa Monica, California, and he's intent on dispensing with the capital city altogether. But, in his anger and disappointment with the politics and culture of Washington, he is forgetting one thing: He, as much as anyone else, is responsible for the very mess he desperately wants to escape.

Luntz came to Washington — fresh from an education at the University of Pennsylvania and Oxford — in 1987. His quick mind and ability to easily explain complex polling data led to a succession of plum jobs: First, as Pat Buchanan's pollster in his insurgent 1992 challenge to George H.W. Bush; then, on Ross Perot's independent general election campaign. Not particularly ideological or partisan, Luntz focused on disaffected and disgruntled voters — the type that both Buchanan and Perot appealed to. The following year, he polled for then-New York Mayor Rudy Giuliani, and it was during this time that he caught the eye of Gingrich. The Georgia conservative knew that any chance his party had of taking over the House depended on appealing to the very voters Luntz had spent so much time researching. "Frank was the first person to understand the scale of radicalism in the middle class," Gingrich would say. "He understands the citizen populist reaction against government in a way that is very helpful."

By 1994, Luntz was flying around the country with Gingrich and shaping the speaker-to-be's message. When Luntz talks about this era, his tone is nothing short of wistful. "I miss the old days," he tells me. "I had one year of my life that was better than every other. It began with a retreat in Salisbury in 1994, and it ended with Republicans on January 3 taking control of the House. I was dressed in my usual sneakers and some sort of polo shirt. They picked me up off the ground and carried me on the floor of the House so I could be there." After aiding other Republican candidates and advising the GOP as it successfully impeached Clinton, Luntz appeared frequently as a guest on national television shows and wrote a couple of books. In short, he became a member of the Washington scene.

To this day, Luntz talks about Gingrich with a reverence that feels unusual coming from the wonkish mind of a pollster. "He is brilliant — an intellectual genius and someone who genuinely wanted to spark a nationwide debate involving every American about the future of the country," Luntz says, before excoriating those who tried to attack Gingrich over ethics violations (the House ethics committee eventually fined the former speaker $300,000 for misusing tax-exempt funds to support a college course he taught). In Luntz's telling, what was once a visionary movement of bold ideas has been consumed by the nasty and anti-intellectual culture that dominates Washington. "I read these blogs," he says, his voice downbeat. "They are so bitter. So bitter and so angry. ... It's not my style." And later: "I think Washington, D.C., is intellectually tired."

It's hard to argue with Luntz's take on the state of intellectual debate in Washington. But Luntz's career has been about nothing so much as cheapening language and obscuring honest discussion. During the debate over tort reform in 2005, a memo written by Luntz, which eventually leaked to the press, classily counseled Republicans with the following: "It is tempting to counter-attack using facts and figures. Resist the temptation. ... The President's language works because it speaks to a series of individual proposals that common sense suggests will lead to job creation." When House Republicans wanted to gut Medicare in 1995, Luntz advised them to be, well, blatantly dishonest about what they were doing: If the cuts would be perceived as long-term savings, he said, then the public would go along with benefit cuts. "We want a solution that preserves and protects Medicare," Gingrich said at the time, echoing Luntz's advice. Luntz's most notorious memo may be the one he sent out in 2003 about the threat of global warming: "Should the public come to believe that the scientific issues are settled, their views about global warming will change accordingly. Therefore, you need to continue to make the lack of scientific certainty a primary issue" — even though no such "lack of scientific certainty" exists.

And, yet, if you ask Luntz about his role in Washington over the last decade, he has no regrets. "I wouldn't change anything," he says. Pushed on whether his snappy and often misleading slogans hurt political debate, he is circumspect, saying only that sloganeering has been going on for 150 years. As for partisanship, which he lists as one of his main reasons for wanting to escape the Beltway, he is equally remorseless. But didn't the Clinton impeachment, which he helped bring about, play a crucial role in creating the climate he so detests? "He should have resigned," Luntz says curtly of Clinton, although he does later admit that Republicans were too angry during this time. Talking to him, it's hard not to get the sense that what he really doesn't like about Washington is that Republicans simply are not winning as much. In short, message discipline can't mask what most Americans see as a failed administration and a corrupt party. And, for this message shaper, nothing could be more frustrating.

Part of his problem may be that Republicans are not listening to him as much anymore. According to Luntz, he warned Republicans more than a year before the 2006 elections that they were going to lose badly, but his advice on how to rectify the situation was ignored. It's no secret, however, that Luntz and House Minority Leader John Boehner share a long-standing dislike of each other, and there have been whispers that it was Boehner who kept Luntz from speaking at a Republican retreat last year. According to Roll Call, Luntz responded by making an unsuccessful attempt to get on the event's schedule anyway.

It's hard not to sympathize with Luntz's desire to get away from Washington and spend some time at the beach. When the subject of his new condominium comes up, he first mentions his home in the Washington suburb of McLean, Virginia."You've probably heard about my house," he exclaims. "It's got a great collection of historic memorabilia: baseballs, Hollywood, but, more importantly, the first Life magazine, the first Sports Illustrated, the first TV Guide." (Luntz once said of his home that "People like to call [it] the Smithsonian West. It isn't. It's a house where people come to play and learn.") And yet, he's willing to give it all up: "I gotta tell you something about L.A.," he says. "I can turn my brain off." No kidding. Luntz may find the inner peace he craves by escaping, but the city he leaves behind will still have plenty of Republicans who share his disgust with what the GOP has become. They just won't have the author of their misery.

By Isaac Chotiner
If you like this article, go to www.tnr.com, which breaks down today's top stories and offers nearly 100 years of news, opinion, and analysis