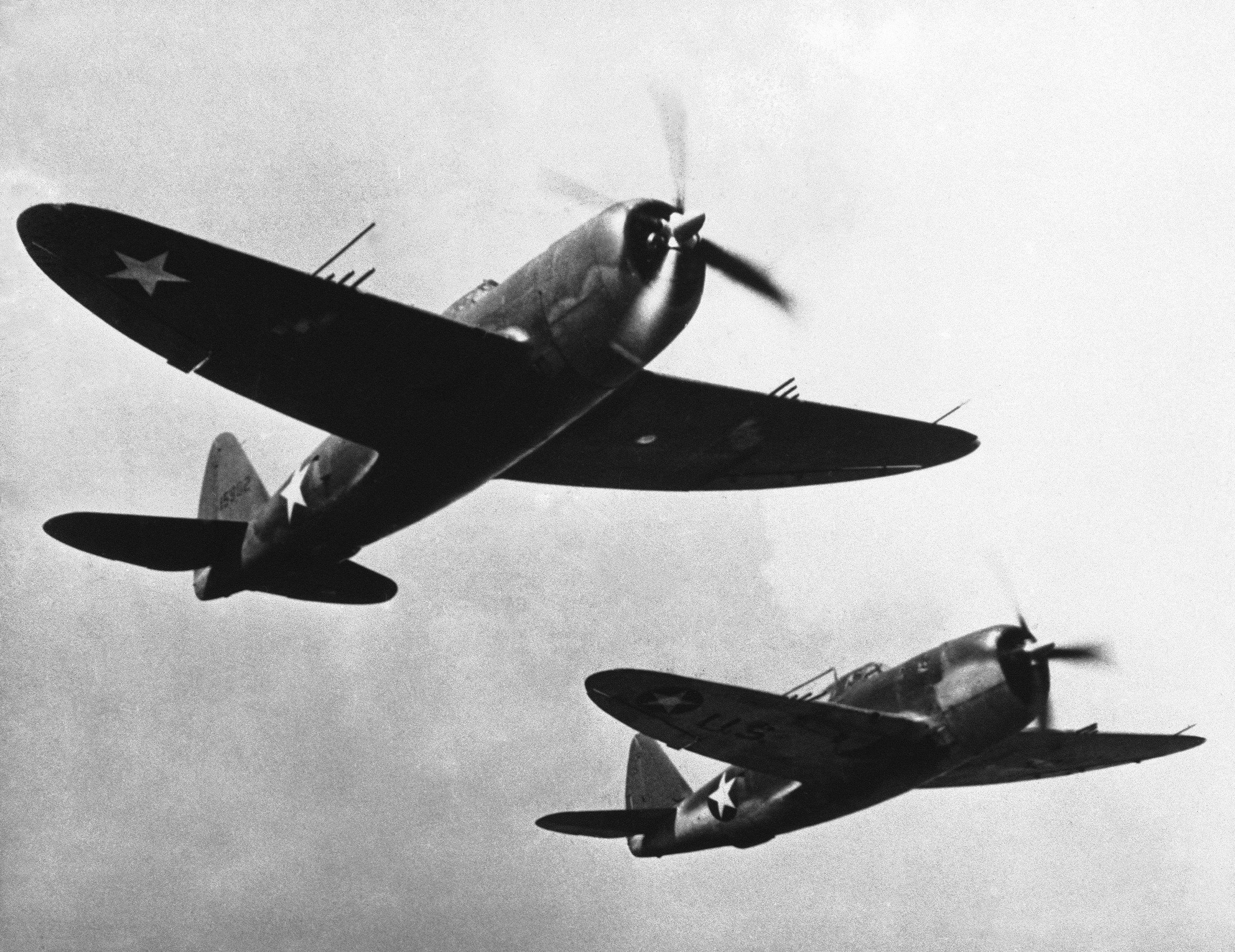 BUYSSCHEURE, France -- It is early afternoon on a spring day in 1944. On a French farm 20 miles from the English Channel, two young brothers tend the cows - perhaps they goof off a bit - as their father brews beer. Then a plane falls from the sky. A P-47 Thunderbolt, an American fighter plane, has been hit by German fire. On the ground, the boys watch as the last moments of a desperate American pilot unfold.

"When the plane fell, there were still bullets exploding" from the plane's .50-caliber machines guns, recalls Marc Cooche. He was 12 then; at 86, he's still haunted by memories of that afternoon.

In Cooche's recollection, the plane veered to avoid some electric cables, maneuvering in the air for two or three minutes before plummeting nose first. The crash left a deep crater in a field of beets. Flames fed by the plane's fuel licked the sky, and the hole burned for days.

The boys and their father wanted to rescue the pilot. Cooche's father "came with horses and barrels of water to put out the fire," he says, but Germans had arrived at the site and turned him away.

In a world war, the loss of a single plane and its 22-year-old pilot, Lt. Frank Fazekas, in rural France drew scant attention. Over time, the pit in the field was filled with debris. Dirt blanketed the makeshift grave, so the farmers could plant again.

Cooche stayed on the land, started a construction business and had children.

But he never forgot about the pilot and his plane. He's not the only one.

"He was the love of my mother's life"

Frank Fazekas Jr. was just six months old at the time, living with his mother in a tight-knit Hungarian community in Trenton, New Jersey.

Fazekas Jr. would pore over letters written between his mother and father, focusing on his father's signature. "I would practice signing my name like he did," he says.

Because his dad flew, he loved airplanes. He got a degree in aeronautical engineering and became an Air Force pilot, serving in the Vietnam War. He later worked with Department of Defense contractors and now, at 74, he's in his third career as a tour business owner in New Hartford, New York.

"For a lot of years I felt like I was trying to complete something for him ... the whole aviation thing, the flying, it was all cut short, I mean so abruptly at age 22."

The family knew little about Fazekas Sr.'s death, other than sparse account of his the wingman, Lt. Charles H. Nott, which differs in some aspects than Cooche's recollection: Nott reported the plane spun out of control, with no radio call for help.

His mother, Theresa, never got over the death of her husband.  She was his "darling," ''sweetheart" and "dearest wife" in his letters home. "He was the love of my mother's life. She talked about him constantly, even after she remarried," Fazekas said.

Then, in 2015, he got a call from the University of Wisconsin:

They knew where his father's plane had crashed. And they knew that his remains were still there.

Search for a fallen pilot

The effort to find Fazekas Sr. began in 2014, when University of Wisconsin-Madison researchers succeeded in returning the remains of another soldier to his family. That inspired them to reach out to Department of Defense officials the next year to propose a partnership to find the missing. It would become the university's Missing in Action Recovery and Identification Project.

Military officials combed through hundreds of cases. They settled on looking for Fazekas, because the statements of Cooche and the wingman pointed to a specific location. Scouts were deployed to France to inspect the crash site and talk with Cooche.

But the next spring, just a few months before excavation was to start, ground penetrating radar found no sign of the crash.

"We were frantic, we were very frantic because we put a lot of time into this case," said Charles Konsitzke, facilitator of the project.

A few days later Department of Defense officials searching the archives found aerial images of the area taken two days after the crash that helped point them to the exact location.

They found six machine guns. They found the plane's engine. And they found some bones of Frank Fazekas Sr., and his dog tags.

They had a special visitor during the 2016 dig. They gave Frank Fazekas Jr. a pair of gloves to help out. As the hours passed, he found pieces of his father's plane. He kept some items, including a black rubber piece that may have come off the control stick.

"I thought that might be something my father actually held on to," he says.

He also met the man who was present for his father's last moments: Marc Cooche, who still lived 300 yards from the crash site.

There were many hugs.

On May 8 - the 73rd anniversary of the end of the war in Europe - Buysscheure will pay tribute to the airman. The building that houses a library, performance room and school will be renamed the Frank Fazekas Cultural Center, and a plaque with his name will be added to the monument to local war dead.

Fazekas, his wife and some university officials plan to return for the festivities. Cooche also will be there.

Frank Fazekas Sr., though, will be an ocean away. He will be buried Wednesday at Arlington National Cemetery.

An Army uniform will be laid out on his bones. And he will share his casket with the ashes of Theresa, his "dearest wife."