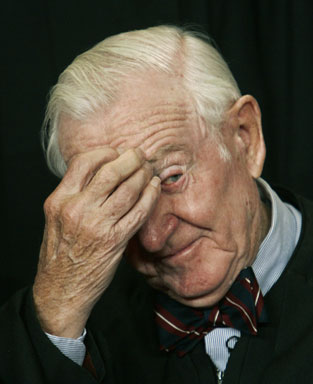 Dario Franchitti drove conservatively on a troublesome course Sunday to win the Gold Coast Indy and overtake Juan Montoya in the points race.

Franchitti, the pole winner, trailed Montoya by 12 points going into the next-to-last race of the CART FedEx season. Montoya did not finish.

"Our strategy was to drive smoothly and make no mistakes," said Franchitti, who gave expatriate Australian team owner Barrry Green a victory before a crowd of 102,000, a race-day record.

Franchitti leads Montoya in the points race 209-200 entering the finale, the Marlboro 500 at Fontana, Calif., on Oct. 31. Montoya is bidding to become the first CART rookie to win the title since Nigel Mansell in 1993.

"When I heard Montoya was out, I thought this was a perfect weekend," Franchitti said. "You never give up, and I think the only pressure we take into California is what we place on ourselves."

Franchitti earned 22 points for the weekend 20 for the victory and a point each for winning pole and leading the most number of laps in the race.

Max Papis pitted only twice and took second, 2.6 seconds behind Franchitti. It was Papis' best result since the Italian began driving on the circuit in 1996.

This was the ninth different winner in the 9-year history of the Australian race.

Montoya was running third behind Franchitti and Fernandez when his car slid heavily into the tire barrier, putting him out of the race on the 49th lap.

"I locked the rear brakes, turned around and tagged the wall," Montoya said. "Obviously, this isn't the way I wanted to end the day."

After the race, Franchitti's girlfriend, actress Ashley Judd, scuffled with a photographer. Judd, objecting to having her picture taken, pushed the photographer's camera from her face.

Franchitti teammate Paul Tracy was running third early in the race when told by stewards he would be penalized for pulling ahead of Herta at the start.

After the black flag, Tracy came through the pits on a penalty and emerged in 10th, waving his hand in anger as he drove past his pit crew. The Canadian finished seventh.

Two drivers came from well back in the field to finish in the top 10. Robby Gordon of the United States went from 22nd to eighth and Brazil's Gualter Salles went from 27th and last to 10th.

Christian Fittipaldi was among the early drivers out of the race. He had to escape from his car following an engine fire on the third lap, the first time this season he has not finished.

"When I went through the corner, I got on the brakes to pull off, but I had no brakes because the fire burned trough them," Fittipaldi said. "I had no idea what was going to happen."

Al Unser Jr., who is leaving the Penske team after Fontana to compete next year in the Indy Racing League, went out on the 22nd lap with a throttle problem.