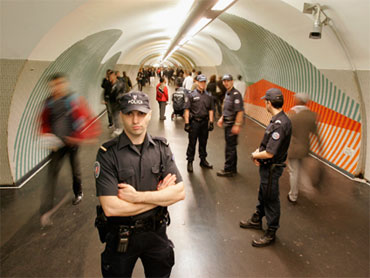 He said Sunday the warning of a potential attack by al Qaeda in the Arabian Peninsula was received "in the last few hours, few days."

European officials were informed that "al Qaeda in the Arabian Peninsula was doubtless active or envisioned being active" on the "European continent, notably France," Hortefeux said during a joint TV and radio interview.

"The threat is real," he said on RTL-LCI-Le Figaro's weekly talk show.

Sources tell CBS News justice and homeland security correspondent Bob Orr that recent threats against Europe are credible in that much of the information has already been corroborated. But the problem with this newest report, which comes from al Qaeda and the Arabian peninsula, is the information is not specific. Officials do not have time, date, place or a target list, reports Orr.

The warning from Saudi Arabia is the latest in a series of alerts that have put French security forces and others in high-vigilance mode.

On Sept. 9, Interpol, the international police organization, signaled an "Islamist threat on a world scale, and notably on the European continent," Hortefeux said without elaborating. That was followed by a Sept. 16, report of a woman suicide bomber who could take action in France - later judged not fully credible.

Intelligence sources in North Africa also contacted France about a potential threat as did the United States, he said. He said he had spoken at length with U.S. Homeland Security Secretary Janet Napolitano.

The threat, reports Orr, may be coming from al Qaeda in the Arabian Peninsula (AQAP) - al Qaeda's Yemen-based franchise which, despite having only officially formed a couple years ago, has already demonstrated the ability to attempt serious attacks on the West. It was AQAP who trained and equipped a Nigerian man for his failed Christmas Day bomb attempt on a jetliner as it approached Detroit.

It was the first time a French official has offered details about potential threats since mid-September, when officials first publicly invoked the possibility that France could be a target of radical Islamist groups.

"We must not overestimate the threat or underestimate it," the minister said. "We are directly concerned."

No one could be reached at the Saudi Interior Ministry late Sunday.

The U.S. State Department advised American citizens living or traveling in Europe earlier this month to take more precautions following reports that terrorists may be plotting attacks on a European city, possibly a shooting spree or other type of attack similar to the deadly 2008 Mumbai attacks in India.

France began boosting security last month at busy tourist sites like Notre Dame Cathedral and the Eiffel Tower, which was twice evacuated after false claims of an attack. French authorities recorded nine bomb alerts in the capital in September, including the two at the Eiffel Tower - a threefold increase from a year earlier. No explosives were found.

Speculation on the source of a potential terror threat has also focused on al Qaeda in the Islamic Maghreb, another al Qaeda offshoot active in Algeria and Africa's Sahel region, which took five French citizens hostage Sept. 16 from a heavily guarded mining town in Niger. Two workers from Togo and Madagascar also were captured.

French fears that it could be a target of the Maghreb affiliate of al Qaeda are based on Paris' historic ties to the region, where it is a former colonial ruler, and recent enmity caused by such things as the French law banning burqa-style veils in streets. Al Qaeda had spoken against the measure before it became law. France also has soldiers in Afghanistan.

A threat from al Qaeda in the Arabian Peninsula would be unusual for France and Europe. The group is made up of radical Islamists from Yemen and Saudi branches who merged a year and a half ago.

Whether various al Qaeda affiliates coordinate action or communicate with each other is unknown, but experts tend to doubt that is the case.

Orr reports that, while the most recent terror threats appear to be aimed at Europe -- likely due to the fact that European cities make slightly easier targets given their relative proximity to North Africa and their large indigenous populations from Pakistan and other Muslim nations -- "these groups would all like to hit the United States; still the gold standard for them."

Security measures were tightened around foreign interests and Western embassies in San'a for possible terrorists acts, a security official said. He spoke on condition of anonymity because he is not authorized to speak to the media.

Police closed the main road leading to the U.S. embassy and security measures were tightened around the British embassy and the French embassy.

On Friday, the Department of State warned U.S. citizens of the high security threat level in Yemen due to terrorist activities and France urged families of French workers there to leave the country on security concerns. Britain has urged its citizens to remain vigilant in Yemen.

On Oct. 6, attackers fired a rocket at a convoy carrying Britain's No. 2 diplomat in Yemen and a separate attack on the same day by a security guard killed a French oil worker. Britain's deputy chief of mission Fionna Gibb was unharmed in the rocket attack but another embassy official suffered minor injuries.