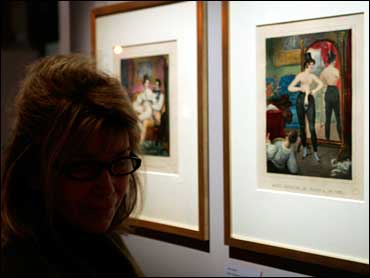 Ribald and X-rated, a new exhibit at France's national library is banned to anyone under 16.

The exhibit that opened this week offers a peek at France's long-secret library of libido, where, starting in the 1830s, librarians hid from the national collection books and other documents that they deemed dangerous for public morality. They called it L'Enfer, or Hell, and kept it under lock and key.

In 1849, library director Joseph Naudet described L'Enfer as "a hiding place ... in which we lock up certain books that are very bad, but which are sometimes very precious for book lovers and have a great monetary value."

The historic secrecy surrounding the collection only fanned curiosity about it. L'Enfer still exists today - complete with its own special classification category - though it is much easier for patrons to access works from the collection.

The exhibit "Hell at the Library, Eros in Secret" includes 350 pieces of libertine literature, pornography, Japanese prints, photographs and audio recordings of people reading once-censored poems. Dozens of banned books - including a manuscript by the Marquis de Sade - are on show, as are many other finds that might surprise some visitors.

Take the political pamphlets. As revolutionary fever swept France in the 18th century, pamphlets were printed to foment anti-clerical or anti-royalist sentiment. Marie Antoinette, scapegoat for the excesses of the French nobility, was pictured raising her royal skirts in a host of undignified poses.

One 1790 anti-clerical pamphlet purported to contain a list of priests found in flagrante delicto with ladies of the night, along with the women's names and addresses and a list of the "amusements (the priests) enjoyed with them."

In the 1830s, pop-up pornography was in vogue, in the form of a paper door that could be lifted to uncover a naughty scene underneath. In one scene, the swinging door reveals a gentleman showing off his manhood to a blushing maiden. "This, Mademoiselle, is how you can sum up the history of France," the caption reads.

A few documents provide glimpses into Paris' fabled houses of ill-repute. In 1900, a police report compiled the addresses and prices of Paris' bordellos, a job that the officer apparently carried out zealously.

Curators Marie-Francoise Quignard and Raymond-Josue Seckle note that the police official recorded "a number of anecdotes that were not very administrative."

The curators kept the exhibit tasteful and scholarly, but they clearly had fun coming up with its layout. In the show's first stop - a strangely empty room - simple plaques hang on the walls. Like peepshow patrons, visitors can lift the plaques to peer into the main gallery through holes in the wall.

"Hell at the Library" runs at the Francois Mitterrand National Library through March 2. Minors under age 16 are not admitted.