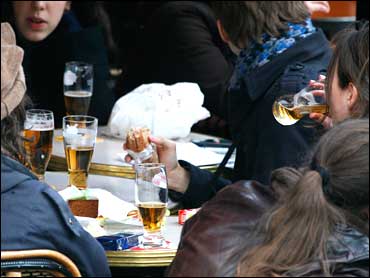 A spot of Calvados, the apple brandy, in the bottle to help baby sleep. Champagne for all at the family fete. And wine anytime, well, because we're French.

All this tippling has given authorities pause as studies show that a surprising number of young teenagers are knocking it back in a serious way, often legally. France's conservative government now wants to wean the country's youth off the bottle with a ban on under-18 drinking.

Lawmakers in the National Assembly, the lower house, adopted an amendment Monday that would ban the sale of alcohol to teens under the age of 18 and fine the vendors up to 7,500 euros ($9,400). They also voted to forbid the overnight sale of alcohol at gas stations, thought to be a prime source of booze for the young. The amended bill still requires approval by the Assembly and the upper house of parliament, the Senate.

In a double-whammy, legislators voted to ban the sale of tobacco for those under 18, the latest step in a progressive crackdown on smoking.

"I think that (the health minister) put a finger in a grenade for which youths will pay dearly: She has created prohibition in France," said Bernard Quartier, president of the National Federation of Cafes, Brasseries, Discotheques, representing some 41,300 establishments.

"The street is going to become the premier bistro of France," he said.

The drinking age in France varies depending on the type of alcohol involved and the place of sale. But anyone 16 or older can order beer and wine in bars.

French teenagers who suddenly find themselves underage may grow jealous of neighboring countries such as Germany or Italy where the legal drinking age is still 16 for beer, wine or liquor. Europeans overall take a more liberal view of alcohol than, for instance, the United States, where the legal drinking age is 21. In most western European countries, it ranges from 16 to 18.

A study of French 16-year-olds showed an overall rise in regular alcohol use from 1999 to 2007, going from 8 percent to 13 percent. In 2007, almost one in five boys, and one in 10 girls, reported at least 10 drinking episodes during the month, according to the French Monitoring Center on Drugs and Addiction.

"In France, we've always had a hard time saying we are sick because of alcohol," said Philippe Batel, a psychiatrist specializing in treating alcoholism.

The emerging picture differs drastically from the image of France as a nation of relatively sophisticated drinkers for whom alcohol is part and parcel of the "joie de vivre," the notion of living well that in the public imagination - at home and abroad - the French do best.

It was unclear whether the measure sponsored by Health Minister Roselyne Bachelot would be as effective as the law which did the unthinkable by banning smoking in France's cafes as of January 2008.

Critics say the budding alcohol law could have been tougher but that economic interests prevailed, notably to protect vintners risking a potential dent in business. A green light to allow advertising on the Internet for alcoholic beverages for the first time dilutes the measure's impact, they say.

Bernard Farges, who heads the wine syndicate of AOC Bordeaux et Bordeaux Superieurs, said without the ads, the law could have been quite harmful to the wine industry. "We're obviously not against supervision, a notion of public health," he said.

Others contend that prohibition in itself is a wrong-headed approach to the growing problem of drinking among teens.

Cafe owners complain that they cannot play the role of cops, checking everyone's identity. Some with a large under-18 clientele say business will suffer.

"Ten-year-olds, 12-year-olds, I agree. But to forbid 16-year-olds? You can't take people for idiots," said Anais Chettrit, owner of the cafe Le Moliere in eastern Paris.

Chettrit said that 60 percent of the clients at her busy cafe, near two high schools, are under 18 and that it was "certain" lowering the drinking age would cut into business.

The larger problem is the image French have of alcohol, said Batel, the psychiatrist at Beaujon Hospital in Clichy, north of Paris: "Lots of French have a hard time seeing it as a product that is potentially a drug or can be something other than conviviality, good wine French-style or gastronomy."

Or to induce baby to sleep.

Calvados, the pungent brandy with a cider base, was long added to the baby bottle in the Brittany region in western France to help lull the little one to sleep. Such Old World tricks have largely fallen away - although Brittany is a leader in alcohol abuse in France - but old ways can die hard.

Chettrit, the cafe owner, repeated what many high schoolers were saying anonymously: They will find other ways to drink.