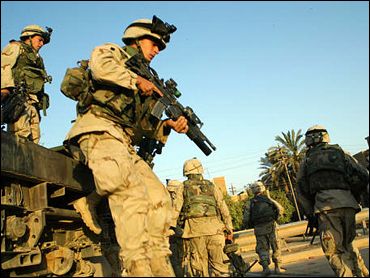 France's president Tuesday ruled out sending French troops to Iraq, following India and Germany in rejecting U.S. calls for help without approval from the United Nations.

Although a few nations are sending troops, near daily guerrilla attacks - many of them deadly - and growing doubts about the basis for the war are complicating Washington's search for peacekeepers to replace exhausted American troops in Iraq.

In Paris, President Jacques Chirac, a leading opponent of the war, told the Czech president that sending French soldiers to Iraq "cannot be imagined in the current context."

He cited comments last week by his foreign minister, Dominique de Villepin, who said a French role was unthinkable without approval by the U.N. Security Council.

India also rejected a U.S. request for peacekeepers for Iraq, saying Monday it would consider such a move only under a U.N. mandate. And German Chancellor Gerhard Schroeder said last week that his country would consider sending peacekeepers only if asked by an interim Iraqi government or the United Nations.

"We are very consciously not with troops in Iraq," German Foreign Minister Joschka Fischer said Tuesday. "The German position about this did not change."

The long tours of duty in Iraq are heightening the strain on both the U.S. Army and on soldiers' families back home. On Monday, the U.S. military said thousands of troops from the 3rd Infantry Division, which helped capture Baghdad, would stay in Iraq indefinitely because of the precarious security situation.

The Bush administration has scored some success in recruiting other countries to help patrol Iraq. Poland will contribute 2,300 soldiers to a brigade that will also include units from Bulgaria, Romania, Hungary and Lithuania.

A second brigade will have 1,640 Ukrainians and the third 1,100 Spanish troops as well as units from Honduras, the Dominican Republic and El Salvador and Nicaragua.

And on Tuesday, Croatia said it plans to send in up to 60 peacekeepers. "It is in our interest to contribute to the strengthening of stability in Iraq ... and to prove ourselves a serious partner and a future member of NATO," Defense Ministry official Davor Denkovski said.

However, the decision to keep the 3rd Infantry in Iraq shows the need for even more troops from countries with well-trained and well-equipped military forces.

Even with a U.N. mandate, the decision to send soldiers to Iraq would require considerable political soul-searching for many countries because of widespread opposition to the war.

The failure to find any weapons of mass destruction in Iraq has reinforced the feeling in Europe and elsewhere that the war should have never been fought. Recent doubts that Iraq had tried to import uranium from Africa, as President Bush said in his State of the
Union address in January, have revived debate in Europe over the basis for the war.

That in turn would make it hard for governments to convince their publics of the need to risk the lives of their own soldiers to help the United States.

"Whatever they may have achieved with their bombs and missiles in Iraq ... is overshadowed by the suspicion, which is being confirmed ever more, that for the sake of the war they grotesquely exaggerated the threat posed by Saddam Hussein," Germany's
Sueddeutsche Zeitung newspaper said.

Germany's Berliner Zeitung newspaper said the governments in Washington and London "rather than those in Berlin and Paris are today finding it most difficult to justify their actions" in Iraq.

In a commentary in The Times of India, former Foreign Secretary Salman Haidar cited public opposition to America's Iraq policy as a main reason for refusing to send troops, even as India works for better relations with Washington.

"The Iraq war was widely seen as unjust, and there is sympathy for the Iraqi people with whom we have had age-old ties," Haidar said. "It would be disturbing to see Indian troops deployed against them," even though Indian forces would have been sent to the relatively peaceful Kurdish areas, he said.

Even with a U.N. mandate, Germany and France are already deeply committed to peacekeeping missions elsewhere. Germany has 8,500 troops abroad, mostly in Afghanistan and the Balkans as well as in the Horn of Africa as part of the war against terrorism.

France is leading a European Union operation, mandated by the United Nations, to stabilize the situation in the Congo town of Bunia and has about 4,000 troops maintaining order in Ivory Coast.