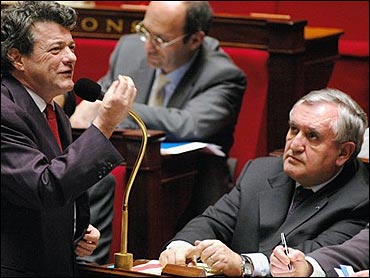 In a final vote, the National Assembly approved a government-backed bill permitting employers to negotiate deals with staff to increase working time to 220 hours a year in return for better pay.

The law effectively clears the way for the gradual erosion of the 35-hour week, a flagship policy of the former Socialist-led government that gave many people more time off but added to concerns about France's declining global competitiveness.

President Jacques Chirac's government has tried to sell the reform to voters as an opportunity to "Work More to Earn More," but many remain unconvinced.

Almost a million people joined strikes and demonstrations earlier this month to defend the 35-hour week and protest other perceived threats to their working conditions and pay. The antipathy could spill over into a May referendum on the new EU constitution, in which the government is campaigning for a 'yes' vote.

Besides working up to 220 extra hours every year — the previous limit was 180 — the new rules allow employees to put in "optional overtime" in return for extra pay. It also lets them sell part of their holiday entitlement back to their employers or put it toward early retirement, training or sabbatical leave.

But trade unions doubt that the extra time will be quite as optional as promised — especially for people working in small companies.

"Officially they can say no. In practice it's less certain," said Remi Jouan, national secretary of the CFDT, France's largest union.

"It won't be the employee that chooses, it's the employer that decides whether there's work or not."

Jouan believes the main impact of the reform will be felt when, or if, France's economy picks up and companies choose to increase hours instead of hiring. "That's our problem with this reform," he said. "It's just not an answer to unemployment."

Most concede, however, that the original 35-hour workweek — introduced on a voluntary basis in 1998 and made compulsory two years later — has failed to create the promised millions of jobs.

A parliamentary committee chaired by conservative deputy Herve Novelli last year claimed the shorter workweek had cost the state upward of euro10 billion (US$13 billion) a year. It also disputed a labor ministry report that it had created 350,000 jobs in its first five years. Novelli welcomed Tuesday's vote, saying the 35-hour law had brought a "salary stagnation that is now difficult to emerge from."

According to a 2003 OECD survey of 25 industrialized countries, only Norwegian and Dutch employees worked less time each year than the French, who put in an average 1,431 hours. In Germany — which also has a 35-hour basic workweek — workers clocked up an average 1,446 hours, while British employees worked 1,673 hours, Americans 1,792 hours and Koreans 2,390 hours.

The French International Investment Agency also says the 35-hour law was often cited by overseas executives as a reason not to operate in France.

In order to apply the new changes, companies will have to risk industrial action by breaking away from the 212 sector-wide union agreements that dominate French working life — unchanged by the new law — and negotiating new deals with their own staff representatives.

Many French workers have become accustomed to their longer holidays and regular weekdays off, and a recent survey by polling agency CSA showed that 56 percent of salaried employees oppose the reform — although jobseekers, retirees and unskilled workers approve.

Some economists say the changes are unlikely to have much effect either way on the economy or its jobless rate, unless the government follows up with broader labor market reform.

If France does not tackle obstacles like its long-winded and expensive redundancy procedures, said Marc Touati, chief economist at Natexis Banques Populaires, "companies will have a hard time creating jobs."