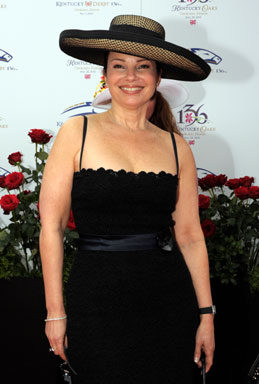 The 52-year-old "Nanny" star revealed to "In Touch" magazine that the man to whom she was married for more than 20 years, Peter Marc Jacobson, is a gay man.

The couple met when the actress and Jacobson, 52, were in high school.

"Peter and I met when we were 15," Drescher tells In Touch. "We were just kids and didn't know who we truly were. We went through a lot together."

Fans of "The Nanny" might recall a closing logo showing black-and-white cartoon caricatures of Fran and Peter exchanging a smooch in bed with the logo "Highschool Sweethearts" overhead. It was their production company that produced the six-season show. Peter was co-creator and executive producer.

The couple split in 1999, the same year Drescher's CBS series "The Nanny" went off the air. According to an insider through In Touch, Peter came out to Fran shortly thereafter.

Fran has even been active in showing support for her ex-husband's homosexuality, co-hosting a Los Angeles cocktail party in 2008 with Peter to benefit an organization that sought to block California's ban on same-sex marriage.

Both remain showbiz partners and are currently working together on a new sitcom based on their different kind of  20-year relationship.

Also, their friendship remains in tact, with both helping one another find potential mates.

"We have even fixed each other up!" says Drescher to the magazine. "I more successfully than him, by the way."