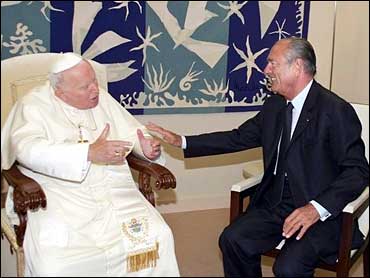 His voice weak, his legs unsteady as he knelt in prayer, Pope John Paul II joined thousands of other ailing pilgrims Saturday at a cliffside shrine known for its miraculous cures, telling them he shares in their physical suffering and assuring them the burden is part of God's "wondrous plan."

The rare reference to his own illnesses - Parkinson's disease and crippling knee and hip ailments - came at the start of a two-day visit to the shrine to the Virgin Mary, where Roman Catholics seek healing, hope and inner peace.

"With you I share a time of life marked by physical suffering, yet not for that reason any less fruitful in God's wondrous plan," the 84-year-old pope said in remarks read for him by a French cardinal.

"Dear brothers and sisters who are sick, how I would like to embrace each and every one of you with affection, to tell you how close I am to you and how much I support you."

John Paul spoke haltingly in French, slurring his words, when addressing French President Jacques Chirac shortly after arriving from Rome. Later, he made no attempt to read his brief speech when he prayed in the ivy-covered grotto where Mary is said to have appeared to St. Bernadette in 1858.

He was hoisted from a wheeled throne onto a kneeler to pray at the grotto, but after less than a minute he slipped, and aides immediately steadied him and lifted him back into his chair.

When he was helped back into to his seat, there were tears in his eyes, reports CBS News Correspondent Tom Fenton.

"Those who meet the pope in private say his mind is still lucid," Fenton says. "It's his body that no longer supports his will to carry on. His own experience is something he can share with the pilgrims who come to drink the waters of the spring in search of cures."

Then, following Lourdes' custom, he sipped a glass of water from the spring that flows underground, believed by many to have curative powers.

"Everything is normal, the pope was only tired," papal spokesman Joaquin Navarro-Valls told reporters. "We have to get used to seeing him that way."

In the late afternoon John Paul returned to the grotto and delivered a brief speech, although with some difficulty, saying "I have reached the goal of my pilgrimage" with the stop.

"Happy because I've seen him, and sad because this will be the last time I'll see him because of his health," she said.

Organizers predicted as many as 300,000 pilgrims would fill this town nestled in the Pyrenees mountains in southern France for the pope's visit, and the estimate appeared on the mark. Enthusiastic crowds jammed the narrow streets on a splendid August morning, leaving barely enough room for the papal motorcade to reach the grotto.

Security was heavy but gentle as pilgrims waved at John Paul, a few yards away from his bulletproof white popemobile.

The shrine is said to have brought sight to the blind, cured multiple sclerosis and made tumors vanish. Thousands of people have claimed to have been healed, and the church has recognized 66 claims as official miracles. The Vatican, however, says that the pope is not seeking a cure for his health problems.

The visit began at the airport in nearby Tarbes, where the pope was greeted by Chirac and his wife, Bernadette, on the red-carpeted runway. The Chiracs kissed the pope's ring and escorted him into a VIP building.

Then, speaking with difficulty, John Paul reminded France of its Christian roots and talked of the grotto, which he last visited in 1983.

"With great emotion I wish to join the millions of pilgrims who come to Lourdes each year from every part of the world, in order to entrust to the Mother of the Lord the intentions which they bear in their hearts and to ask for her help and intercession," he said.

Chirac spoke of peace, solidarity and the fight against racism and hate, which he said was "so urgent in the face of the rise of fanaticism and intolerance." France has recently struggled to curb acts of anti-Semitic violence and vandalism at Jewish and Muslim cemeteries.

Hinting at lingering reproach to the United States for launching the Iraq war, Chirac said France and the Vatican together urged "dialogue between cultures as an antidote to violence."

The pope greeted French officials in red-white-and-blue sashes before being ushered out of the room in a wheeled throne draped in white cloth.

Sun-drenched streets, decked with welcome signs, were lined with excited pilgrims. Police on horseback watched over the crowd, and Red Cross workers set up a yellow tent to help those who might suffer from heat stroke or other ailments on a hot day.

Mary holds a special significance for the pontiff. After he was shot by a Turkish gunman in St. Peter's Square in 1981, John Paul said Christ's mother "guided" the bullet's path to save his life.

On Sunday, the pope is to preside over an outdoor Mass in a field. His trip commemorates the 150th anniversary of the proclamation of the Immaculate Conception, the dogma that says Mary was born without original sin.

Most of Lourdes' visitors are healthy, but the site and its spring water have added meaning for the sick. Pilgrims pour the water into small plastic vials in the shape of the Virgin Mary to take home.

Some of Lourdes' pilgrims come in wheelchairs and stretchers. Nurses, scout troops and other volunteers help them eat, bathe in the spring or just shop at the myriad stands selling rosaries and Virgin Mary souvenirs.