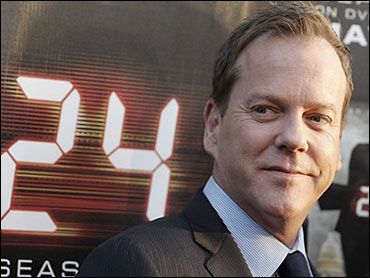 The drama "24" won't be ticking much longer on TV.

Fox announced Friday that its action-packed real-time show starring Kiefer Sutherland as anti-terrorism agent Jack Bauer will wind down at the end of its current eighth season on May 24.

Sutherland said in a statement that the show's cast and crew "always wanted '24' to finish on a high note, so the decision to make the eighth season our last was one we all agreed upon." He also said he was looking forward to creating a film version of "24."

For many, the show encapsulated the Bush administration's response to terrorism after Sept. 11, dealing with issues such as wire taps and using torture as a way to gain information to protect American lives.

The show has received 68 Emmy nominations, winning for outstanding drama series and for Sutherland as lead drama actor in 2006.

"This has been the role of a lifetime, and I will never be able to fully express my appreciation to everyone who made it possible," Sutherland said. "But when all is said and done, it is the loyal worldwide fan base that made it possible for me to have the experience of playing the role of Jack Bauer, and for that I am eternally grateful."

The first six seasons were set in Los Angeles. Following a one-year break forced by the writers strike, season seven went to Africa and Washington, D.C.

The current season has Agent Bauer thwarting a terrorist attack in New York.

By the end of this season, "24" will have presented 194 episodes, making it one of television's longest-running action shows.