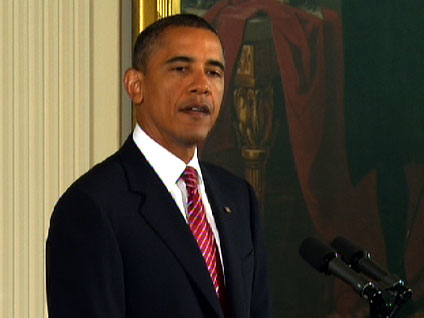 In this month's cover story for Rolling Stone magazine, President Obama weighs in on the cable network Fox News, saying that while he can't object to the network carrying out its constitutional right to freedom of the press, he thinks it promotes a perspective that is "ultimately destructive for the long-term growth" of America.

"Look, as president, I swore to uphold the Constitution, and part of that Constitution is a free press," Obama laughed, in response to a question from Rolling Stone publisher Jann Wenner about whether or not Fox News was "a good institution for America and for democracy."

"We've got a tradition in this country of a press that oftentimes is opinionated. The golden age of an objective press was a pretty narrow span of time in our history. Before that, you had folks like Hearst who used their newspapers very intentionally to promote their viewpoints," Mr. Obama said. "I think Fox is part of that tradition -- it is part of the tradition that has a very clear, undeniable point of view."

Mr. Obama, whose relationship with the cable network has in the past been rocky -- former White House communications director Anita Dunn at one point called it "the communications arm of the Republican party" -- made no concessions in regard to his dissatisfaction for the content of the network's coverage.

"But as an economic enterprise," Mr. Obama conceded, "it's been wildly successful. And I suspect that if you ask Mr. Murdoch what his number-one concern is, it's that Fox is very successful."

Indeed, a recent Politico/George Washington University Battleground Poll revealed that the influence of Fox News on American voters runs deep: In a survey of 1,000 registered "likely" voters polled in September, 81 percent said they relied on cable news channels like Fox, CNN, and MSNBC as a source of political information. Of that 81 percent, 42 percent said they were mainly getting their information from Fox, while only 30 percent named CNN as their primary source of information, and 12 percent said they mainly watched MSNBC.

The poll also indicated that many voters disagree with Mr. Obama on the impact that Fox commentators have on American political debate:

In contrast, Rachel Maddow - a leading liberal commentator and host of MSNBC's Rachel Maddow show - received only an 18 percent approval rating in terms of her impact on American political discourse.

Fifty-five percent of respondents had never heard of her.