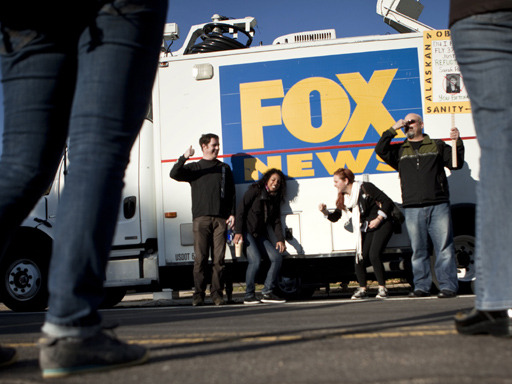 Fox News vice president and Washington managing editor Bill Sammon said in 2009 that despite making on-air claims that President Obama advocates socialism, he privately found the notion "rather far-fetched," according to newly-released audio.

Media Matters, the liberal media watchdog group, uncovered the comments, which Sammon made while on a cruise sponsored by Hillsdale College, a conservative school. (Hear the comments in the video at left.)

"Last year, candidate Barack Obama stood on a sidewalk in Toledo, Ohio, and first let it slip to Joe the Plumber that he wanted to quote, 'spread the wealth around,'" he said. "At that time, I have to admit, that I went on TV on Fox News and publicly engaged in what I guess was some rather mischievous speculation about whether Barack Obama really advocated socialism, a premise that privately I found rather far-fetched."

Sammon, who at that time was Fox News Washington deputy managing editor, repeatedly cast Mr. Obama as socialist in 2008, as Media Matters notes. On October 14, Sammon twice said a comment made by Mr. Obama - the then-candidate had been recorded saying that "when you spread the wealth around, it's good for everybody" - "is tantamount to socialism." He made similar suggestions on October 25 and 27th.

On October 21, as the Daily Beast's Howard Kurtz notes, Sammon said this: "I have read Barack Obama's books pretty carefully, and he in his own words talks about being drawn to Marxists... Now all this stuff's coming out about whether he's a socialist. I don't know why anyone is surprised by it, because if you read his own words and his sort of, you know, orientation coming up as a liberal through college and a young man, it's not a huge shock."

Sammon oversees Fox News' Washington coverage, and Media Matters said he should resign over the comments.

"A top Fox News executive has admitted on tape to repeatedly and deliberately misleading viewers," Ari Rabin-Havt, Executive Vice President at Media Matters, sand in a statement. "This violates the basic and most essential role of a news organization -- that of keeping the public honestly informed."

He added: "If Fox wants to continue to insist that a difference exists between their news and opinion programming, they can start by firing Bill Sammon."

Contacted for comment, Fox News pointed Hotsheet to Kurtz' story, which includes an interview with Sammon. Sammon told Kurtz that when he said he was engaged in "mischievous speculation" about Mr. Obama's beliefs, it was "my probably inartful way of saying, 'Can you believe how far this thing has come?'"

He also said that even though the socialism charges "struck me as a far-fetched idea" in 2008, he didn't regret raising them because "it was a main point of discussion on all the channels, in all the media." Sammon added that he ultimately concluded that the premise had been accurate, as evidenced by Mr. Obama "having taken over the American car industry." In the cruise ship speech, Sammon said that was the point when suddenly "[t]he debate over whether America is headed for socialism seems all too real, especially to those who still believe in capitalism."

Billy Wharton, the 41-year-old co-chair of the Socialist Party USA, told Hotsheet last year that Mr. Obama is not close to being a socialist.

As Kurtz notes, Sammon sent a memo to Fox News staffers during the health care debate encouraging them to use the term "government-run health insurance" instead of "public option." The terminology had been devised by GOP pollster Frank Luntz and was subsequently used by Fox News journalists.

Media Matters told Politico last week it has decided to shift its focus to "guerrilla warfare and sabotage" of Fox News over the network's perceived ideological slant.