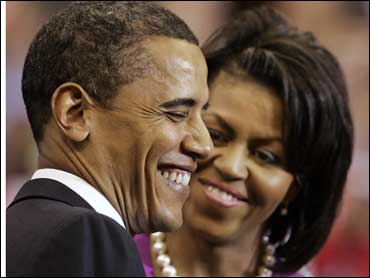 Fox News Channel referred to Michelle Obama as "Obama's baby mama" in a graphic on Wednesday, the latest in a trio of references to the Democratic presidential campaign that have given fuel to network critics.

The graphic "Outraged liberals: Stop picking on Obama's baby mama" was flashed during an interview with conservative columnist Michelle Malkin about whether Barack Obama's wife has been the target of unfair criticism.

In the past two weeks, Fox anchor E.D. Hill has apologized for referring to an affectionate onstage fist bump shared by the couple as a "terrorist fist jab," and Fox contributor Liz Trotta said she was sorry for joking about an Obama assassination.

The incidents are further indications of how closely the endless cable campaign chatter is being watched this year. Hillary Clinton's campaign was angered by what it described as the pro-Obama tilt of some MSNBC commentators. Amid protests, MSNBC's Chris Matthews said he was wrong this winter to say Clinton was a candidate because "her husband messed around." And MSNBC reporter David Shuster was suspended for two weeks for saying Clinton's campaign had "pimped out" daughter Chelsea by having her make political phone calls.

"Obama's baby mama" was never said on the air. Malkin said during her interview that she had seen no gratuitous or cheap shots taken against Michelle Obama by Republican or conservative critics.

Joan Walsh, a columnist from Salon.com, criticized the graphic on Thursday as a slur.

"Do you try to explain that `baby mama' is slang for the unmarried mother of a man's child, and not his wife, or even a girlfriend?" Walsh wrote. "Are they racist, or just clueless? Isn't there racism even in their cluelessness, if somebody didn't know what `baby mama' means, but used it anyway? Even at Fox, won't somebody have to apologize?"

"Baby Mama" also was the title of a recent movie about a woman who hired a surrogate to bear a child. It starred Tina Fey and Amy Poehler, both of whom are white.

Bill Shine, senior vice president of programming at Fox, said in a statement that a producer "exercised poor judgment" during the segment. The producer was not fired; no other disciplinary action was announced. Hill's "terrorist fist jab" comment came in a tease to a segment on the candidates' body language, and it wasn't repeated during the subsequent interview. She told Fox it was taken from something she had read online.

Hill apologized on-air four days after she said it. Hill said some people "thought I had personally characterized it inappropriately. I regret that. It was not my intention and I certainly did not mean to associate the word `terrorist' in any way with Sen. Obama and his wife."

Trotta's assassination joke came May 25 as she commented about how some considered it distasteful for Clinton to refer to Robert F. Kennedy's assassination when explaining why she was staying in the presidential race.

"Now we have what some are reading as a suggestion that somebody knock off Osama," she said, quickly correcting herself. "Obama. Well, both if we could."

Obama's name has often been confused with terrorist leader Osama bin Laden's, by people ranging from Mitt Romney to CNN's Alina Cho. And MSNBC once flashed a picture of bin Laden as Chris Matthews talked about Obama.

Trotta apologized on-air the next day, and hasn't appeared on Fox since.

"I sincerely regret it and apologize to anybody I've offended," she said. "It's a very colorful political season and many of us are making mistakes and saying things that we wish we hadn't said."