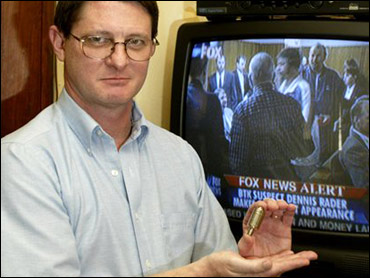 It's not that Sam Kimery objects to the views expressed on Fox News. The creator of the "Fox Blocker" contends the channel is not news at all.

Kimery figures he's sold about 100 of the little silver bits of metal that screw into the back of most televisions, allowing people to filter Fox News from their sets, since its August debut.

The Tulsa, Okla., resident also has received thousands of e-mails, both angry and complimentary — as well as a few death threats.

"Apparently the making of terroristic threats against those who don't share your views is a high art form among a certain core audience," said Kimery, 45.

Formerly a registered Republican, even a precinct captain, Kimery became an independent in the 1990s when he said the state party stopped taking input from its everyday members.

Kimery now contends Fox News' top-level management dictates a conservative journalistic bias, that inaccuracies are never retracted, and what winds up on the air is more opinion than news.

"I might as well be reading tabloids out of the grocery store," he says. "Anything to get a rise out of the viewer and to reinforce certain retrograde notions."

A Fox spokeswoman at the station's New York headquarters said the channel's ratings speak for themselves. For the first three months of this year, Fox has been averaging 1.62 million viewers in prime-time, compared with CNN's 805,000, according to Nielsen Media Research.

Kimery's motives go deeper than preventing people from watching the channel, which he acknowledges can be done without the Blocker. But he likens his device to burning a draft card, a tangible example of disagreement.

And he's taking this message to the network's advertisers. After buying the $8.95 device online, would-be blockers are shown a letter that they can send to advertisers via the Fox Blocker site.

"The point is not to block the channel or block free speech but to raise awareness," said Kimery, who works in the tech industry.

Kimery doesn't use the device himself; his remote is programmed to only a half-dozen channels. Plus he occasionally feels the need to tune into Fox News for something "especially heinous."

Business could pick up since the blocker was alluded to in a recent episode of the ABC drama "Boston Legal." The show's original script mentioned Fox News, but ABC had the references removed.

The boisterous conversations on Fox News may be why the station is so popular, said Matthew Felling, media director for the Center for Media and Public Affairs, a nonprofit, nonpartisan media watchdog group. And despite a perception that Fox leans to the right, Felling said, that doesn't mean people who lean left should tune out.

"It's tough to engage in an argument when you're not participating in it," Felling said. "It's just one more layer in the wall that the right and the left are building in between each other."