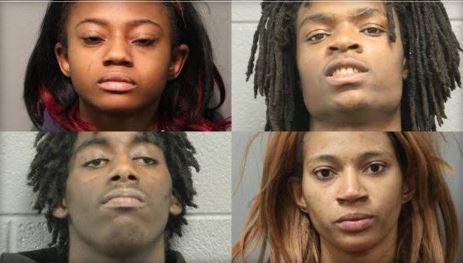 CHICAGO -- The last of four defendants in Chicago to plead guilty in the beating of a mentally disabled teenager that was livestreamed on Facebook has been sentenced to seven years in prison. Twenty-year-old Tesfaye Cooper pleaded guilty this month to committing a hate crime and aggravated kidnapping.

One of the suspects posted video online of the January 2017 attack, in which four African-Americans are seen taunting the bound-and-gagged white teen and using profanities against white people. The video drew widespread condemnation, including from then-President Barack Obama, who called the crime "despicable."

Authorities say the then-18-year-old victim has schizophrenia and attention deficit hyperactivity disorder. The ringleader in the attack, Jordan Hill, earlier pleaded guilty to the same charges as Cooper and was sentenced to eight years in prison. Tanisha Covington was sentenced to three years in prison and her sister, Brittany Covington, received four years of probation.

In sentencing Hill earlier this month, according to the Chicago Sun-Times, Judge William Hooks Hooks directed Hill, 20, to look at paintings and photographs of civil rights leaders hanging on the walls of his courtroom. Hooks reportedly shook his head when Hill was unable to identify Thurgood Marshall, Frederick Douglass and Ida B. Wells.

"A lot of things you think you know, you don't know," Hooks reportedly told Hill. "Every time you take an act like this ... terrible act on this young man who could not defend himself, you spit on the graves of all of the people on these walls."

Prosecutors say Hill -- a classmate of the 18-year-old victim -- picked up the victim at a McDonald's on the eve of the 2017 new year in northwest suburban Streamwood, and drove him around for three days, reported CBS Chicago. Prosecutors said Hill grew angry after the victim's mother contacted him on Facebook to ask where her son was.

Hill allegedly took the victim to the apartment of sisters Brittany and Tanishia Covington on Chicago's west side, where police said a "play fight" between Hill and the victim escalated into beating and abuse. Brittany Covington narrated a Facebook Live video of Hill, her sister, and Tesfaye Cooper tormenting the victim, reports CBS Chicago. The video shows them slapping, punching, taunting and threatening to kill the victim.

Excerpts of the Facebook Live video show the victim with his mouth taped shut slumped in a corner as at least two assailants cut off his sweatshirt and others taunt him off camera. A red band also appears to be around the victim's hands. The victim was peppered with cigarette ashes, and then his hair was cut with a knife until his scalp bled.

A second video, which surfaced on Twitter, showed the suspects grabbing the teen's head, shoving it into a toilet, and forcing him to drink, reported CBS Chicago. The assailants forced him to say "F*** Donald Trump," "F*** white people," and "I love black people," police and prosecutors have said. They also allegedly demanded $300 ransom from the victim's mother.

Chicago police have said the teen was bound in a corner for about four or five hours. The victim was able to escape when the assailants left the apartment to confront a downstairs neighbor who had called police to complain about noise.

Chicago police said they found the victim wandering disoriented in a tank top and shorts in cold weather, bloody and "traumatized."

The victim was present had been present in court for previous sentencings, but was not present Thursday, the Sun-Times reports.