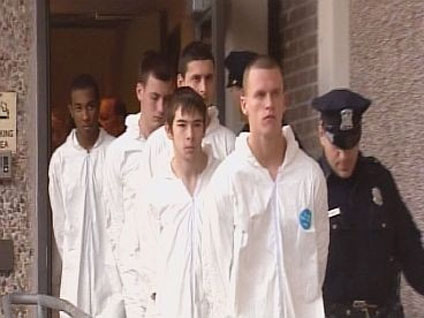 RIVERHEAD, New York (CBS/AP) Three of the seven Long Island teenagers who admitted to being part of a gang that targeted Hispanics for violence were sentenced to seven-year prison terms Wednesday for their roles in the 2008 killing of an Ecuadorean immigrant. A fourth teen who met the group on the night of the slaying was sentenced to a six-year prison sentence.

Anthony Hartfold, Jordan Dasch and Jose Pacheco, all 19, each pleaded guilty to gang assault, conspiracy and attempted assault as a hate crime after confessing that they participated in an ongoing series of attacks against Hispanics, resulting in the Nov. 8, 2008 stabbing death of Marcelo Lucero.

A fourth teen, 18-year-old Christopher Overton, did not participate in earlier attacks with the gang and pleaded guilty to the same charges, but received a maximum of six years.

Lucero, 37, was walking with a friend when the teenagers confronted them. According to prosecutors, the teens were walking near the Patchogue train station in Long Island's Suffolk County looking for targets and began yelling ethnic slurs. One of the boys punched Lucero in the face. Lucero and his friend swung their belts in an attempt to defend themselves and began to chase the teens.

Prosecutors noted that many Hispanics attacked prior to Lucero's murder were afraid to report the crime to police because they feared questions regarding their immigration status - a concern that the teenagers were aware of.

During the midnight confrontation, Lucero reportedly hit 19-year-old Jeffrey Conroy in the head with a belt, which caused him to loose his temper. Conroy opened a folding knife and stabbed Lucero in the chest. The teens scattered after the stabbing, but police found them within minutes and they were arrested near where the stabbing occurred.

In May, Conroy was sentenced to 25 years in prison following his conviction on manslaughter as a hate crime. He was responsible for inflicting the fatal stab wound that killed Lucero, according to prosecutors.

Lucero's murder sparked controversy far beyond Long Island's Suffolk County, where hostility over the influx of thousands of immigrants from Central and South America has been on the rise for nearly a decade.