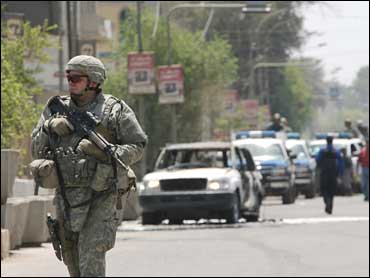 A bomb hit a motorcade carrying Iraq's first lady through Baghdad on Sunday, while the U.S. military said a roadside explosion killed four Marines in the deadliest attack in western Anbar province in months.

The motorcade bombing in Baghdad's Karrada district injured four of Hiro Ibrahim Ahmed's bodyguards but left her unharmed, according to the office of her husband, President Jalal Talabani.

She was headed to the city's central National Theater to attend a cultural festival when the attack occurred just before noon, said the presidential office. It was unclear if she was the target or if the bombing was random.

The four Marines were killed in Anbar province on Friday, but no other details of the incident were released.

Anbar was once a stronghold for insurgents battling against U.S. forces. But in the past year the vast desert province has largely been calmed with the rise of the Awakening Council movement - Sunni fighters who now turn their guns on al Qaeda instead of U.S. forces.

Friday's attack was the most lethal in the province since Sept. 6, when four Marines were killed in combat. The military did not release details of those deaths either.

On April 22, two Marines were killed in Anbar when a bomb-rigged truck exploded at a checkpoint in the city of Ramadi.

He said there was "no place for al Qaeda" to hide in Iraq and U.S. troops were continuing to hunt them down in Diyala province and the city of Mosul, where many are believed to have fled north from Baghdad.

Iraqi health officials said at least 10 people - including two children - were killed in the past 24 hours in the Baghdad neighborhood of Sadr City, a slum of 2.5 million people and a stronghold for the Mahdi Army militia led by anti-American cleric Muqtada al-Sadr.

Officials at two hospitals in Sadr City spoke on condition of anonymity for security reasons.

U.S. and Iraqi forces have been battling militia members there for weeks as part of an Iraqi government crackdown on the fighters.

"It is the full responsibility of the Iraqi government to implement the rule of law," al-Dabbagh said.

The clashes with Mahdi Army have caused deep rifts among Iraq's Shiite majority and have pulled U.S. troops into difficult urban combat.

Militia members have been blamed for firing hundreds of rockets or mortars from Sadr City into the Green Zone, the U.S.-protected area housing the American embassy and much of the Iraqi government. In the past month, more than a dozen people - including two American civilians and soldiers - have been killed inside the zone during the attacks.

Gunmen killed a woman journalist during a botched kidnapping attempt Sunday in the northern Iraqi city of Mosul, police, and family said.

Police said Abdul-Wahab was walking from her home to a market with her mother when two gunmen pulled up in a car and tried to kidnap her. The gunmen shot her twice in the head when she resisted, her mother said.

Her mother, who identified herself as Umm Mohammed, told The Associated Press that she asked the gunmen to take her instead of her daughter.

"I begged the gunmen to kill me instead, they pushed me away and told me that they wanted her not me," she said by telephone.

She was also a member of an association to defending journalists' rights which was formed in 2003, according to Yasir al-Hamadani, the director of the Mosul branch.

"She was a member of our association which is based in Baghdad but has a branch in Mosul," he said, adding that Abdul-Wahab worked at the Salaheddin satellite TV channel and at many local newspapers before working for that agency.

"Besides her work as a journalist, she was activist working with non-governmental organizations as well as being a lawyer," al-Hamadani said. "We are very sorry to lose her. She was very active and very passionate about her work."

The attack took place at about 9:00 a.m. in Bakir neighborhood in eastern Mosul, 360 kilometers (225 miles) northwest of Baghdad, Abdul-Sattar said.

The attack came just over a week after another group of assailants on April 25 gunned down an Iraqi journalist in the southern city of Basra who had been working for a local radio station run by a Shiite political party that is the chief rival of anti-American cleric Muqtada al-Sadr.

Jassim al-Batat, 38, worked for the local al-Nakhil radio station based in Basra.

Al-Nakhil radio is run by the Supreme Islamic Iraqi Council. Its leader Abdul-Aziz al-Hakim has sided with the government of Prime Minister Nouri al-Maliki since Iraqi security forces launched a crackdown on al-Sadr's Mahdi Army militia in Basra a month ago.

Journalists have frequently been targeted or caught up in attacks in Iraq. More than 175 journalists and media support workers have been killed since the U.S.-led invasion in 2003, according to the New York-based Committee to Protect Journalists.

Reporters without Borders, the Paris-based advocacy group, said Friday that 211 media assistants and journalists, including al-Batat, have been killed since the invasion began.

The fate of another 14 journalists and assistants who were kidnapped is not known, the group said.

Hundreds of Iraqi journalists also have been forced into exile since the war started five years ago, Reporters Without Borders said in a report in March. Most fled to Jordan or Syria after receiving threats or surviving murder attempts.

That report found that Iraqi journalists face the unique danger of being targeted by multiple groups including Sunni and Shiite militias, al Qaeda in Iraq, the police and U.S.-led forces.