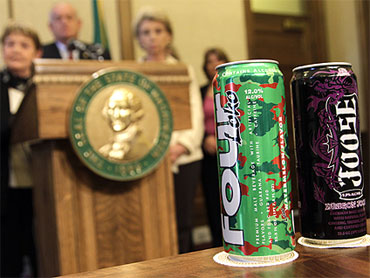 The manufacturer of popular caffeinated alcohol drink Four Loko said Tuesday it will remove the caffeine from its products, pulling the blend off the market just as the Food and Drug Administration is poised to ban it.

Phusion Projects said in a statement posted on its website that the company will remove caffeine and two other ingredients from its products going forward.

The announcement came as the FDA is expected to find as early as Wednesday that caffeine is an unsafe food additive to alcoholic drinks. That finding essentially would ban Four Loko and other drinks like it.

The FDA ruling "should be the nail in the coffin of these dangerous and toxic drinks," Sen. Chuck Schumer, who has pushed the Obama administration to ban the beverages, said Tuesday.

Federal regulators would not confirm Schumer's announcement that a ban was imminent, but Four Loko's statement suggests the company believed it had little choice but to reformulate its drinks.

The statement by the company's three co-founders said they were removing caffeine from the drinks after unsuccessfully trying to deal with what they called "a difficult and politically-charged regulatory environment at both the state and federal levels."

"We have repeatedly contended - and still believe, as do many people throughout the country - that the combination of alcohol and caffeine is safe," said Chris Hunter, Jeff Wright and Jaisen Freeman, who identify themselves as Phusion's three co-founders and current managing partners.

The company told CBS News in a statement earlier this month that the caffeine-alcohol combination was as safe as "having coffee after a meal with a couple of glasses of wine."

Their latest statement did not mention several recent incidents in which college students were hospitalized after drinking the beverage. In response to such incidents, four states - Washington, Michigan, Utah and Oklahoma - have banned the beverages. Other states are considering similar action.

Four Loko comes in several varieties, including fruit punch and blue raspberry. A 23.5-ounce can sells for about $2.50 and has an alcohol content of 12 percent, comparable to four beers, according to the company's website.

While there is little known medical evidence that the drinks are less safe than other alcoholic drinks, public health advocates say the drinks can make people feel more alert and able to handle tasks like driving. A Wake Forest University study found that students who combine caffeine and alcohol are more likely to suffer alcohol-related injuries than those drinking alcohol without caffeine.

Last year the FDA notified more than two dozen manufacturers of caffeinated alcoholic beverages that it never had specifically approved the addition of caffeine to alcoholic drinks and began studying whether it was unsafe and should be outlawed. The agency noted the mix's growing popularity among college students and its potential health and safety issues.

The FDA said then it had not reached a conclusion about the drinks' safety but cited concerns from several state attorneys general who contended the drinks appealed to underage drinkers and encouraged reckless behavior.

FDA spokeswoman Siobhan DeLancey would not confirm any upcoming action Tuesday but said the agency recognizes "this very important public health issue" and will announce the results of its review when it is complete. The Federal Trade Commission, which regulates the marketing of the drinks, declined to comment.