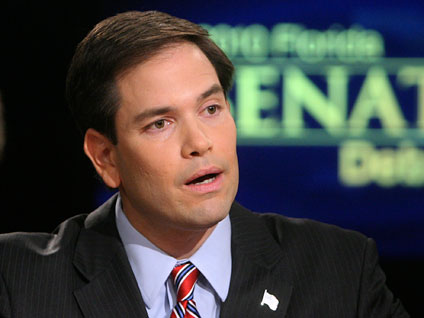 Republican presidential candidates Mitt Romney, Rick Perry, Michele Bachmann and Jon Huntsman are threatening to boycott a Univision-sponsored presidential debate in January in light of allegations of a dust-up between the Spanish-language news network and Sen. Marco Rubio, R-Fla.

The debate is currently slated to take place January 29, and will be one of two scheduled within the week before the Florida primary on January 31. (Another, hosted by CNN and the Republican Party of Florida, will take place in Jacksonville between January 22 and January 31.)

But after allegations, as originally reported in the Miami Herald, that Univision offered to soften an embarrassing story related to Rubio's brother-in-law in exchange for an appearance by the senator on the show "Al Punto," some Republicans are saying they'll abstain from attending in protest.

In a Tuesday letter from Rick Perry communications director Ray Sullivan to Univision, Sullivan says that Perry's team "just learned of Univision's attempt to unethically pressure a prominent Republican elected official to provide access to the station in return for Univision spiking or softening a story about a relative."

As a result, he says, "Governor Perry will not consider participating in the January 29, 2012, Univision debate until your network addresses this ethical breach and takes action to correct it."

Andrea Saul, a spokesperson for former Massachusetts Governor Mitt Romney, said in a statement that while "We have not received any invitation from Univision for a debate," the Romney team was "troubled by these allegations and would not participate in any such debate unless and until Univision satisfactorily addresses this situation."

Meanwhile, Matt David, campaign manager for fellow GOP hopeful Jon Huntsman, echoed this sentiment in a letter to Univision: "Unless Univision resolves this issue in a timely and satisfactory manner, Governor Huntsman will not give consideration to your network's debate currently proposed for January, 2012," he wrote.

Michele Bachmann spokeswoman Alice Stewart said the Minnesota congresswoman would participate in the debate "pending a positive resolution" of the issue.

"This issue was brought to Michele's attention and she has a great deal of respect for Senator Rubio," Stewart said in an e-mail to CBS News. "We reserve our right to participate in the Univision debate pending a positive resolution of this matter by Univision."

The actions are in response to open letters from three Florida congressmen to Republican National Committee chair Reince Priebus and Univision, in which it is alleged that Univision attempted to "extort an exclusive interview from Senator Rubio in exchange for not airing the story" about the 1987 arrest of Rubio's brother-in-law on drug charges.

"This attempt at extorting a respected Republican official like Senator Rubio, who is also a proud American of Hispanic descent, is offensive, unacceptable and demonstrates a lack of journalistic integrity by Univision Television Network," the letter says.

In a Monday letter to the lawmakers, Univision vice president Arya Towfighi called the allegations "patently absurd" and said the company would "respectfully decline" the request to apologize.

"The fact that no such offer or 'extortion' took place is easily confirmed by the fact that two of Univision's internal legal counsel were on the call with Senator Rubio's staff and by the fact that there was no reference to any alleged extortion in the follow-up letter from the Senator's office to Univision repeating its request that Univision kill the story," the letter reads. "Surely they would have used this 'fact,' if it existed, to further their efforts to prevent the story from reaching the public."

It continues: "At no point in time did anyone from Univision offer to kill or soften the story regarding Senator Rubio's brother-in-law in exchange for appearing on any Univision news program. Univision, like any reputable news organization, declined Univision's recent invitations to be interviewed. It would be completely incorrect to assume, however, that Univision would later any new content in exchange for such an appearance. Any statement to the contrary is patently absurd."

Rubio press secretary Alex Burgos told CBS News that "The Miami Herald's article is accurate" but declined to comment further on the matter.