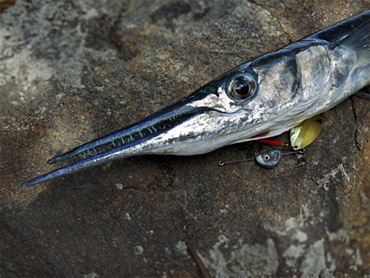 For most kayakers, an afternoon in the mangroves of the Florida Keys is the perfect end to a day.

"I've got an emergency," Michael told the 911 operator who answered his call. "My girlfriend's been hit by a flying fish, I think it was a barracuda or something."

It was most likely a needlefish, Cobiella says, and as it jumped out of the shallow water into the couple's boat, its long, sharp nose stabbed her in the back.

"It came diving past the kayak, and hit her broadside, knocked her out of the boat and she's got, like, broken ribs and punctured lungs," Michael said to the operator.

"I have my hand holding her lungs closed," he continued.

"OK, sir," the operator responded. "I need to know where you're gonna come in to.

"I'm holding her ribs with one hand," Michael replied. "I cannot paddle this kayak anywhere right now. I need you guys to come to me."

Getting to them would be no easy task in the Florida backwaters.

He spoke to Michael on the phone.

"He knew exactly what to tell me," Freestone recalled for CBS News, "and he told me -- he said, 'You need to get here as soon as you can. You need to save a life today." '

It had been about 30 minutes since the original 911 call and time had become precious, Cobiella says.

Larson was transported back to the marina, then airlifted to a nearby hospital and brought straight to the Intensive Care Unit, where she's listed in stable condition.

"This is the most bizarre case I ever ran on trying to make sure someone got back to shore safely," Freestone reflected.

The response team says Michael probably helped save her life, Cobiella observes, not only by applying pressure to her wound the entire time, but also by being able to accurately describe where their kayak was.