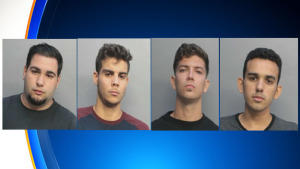 They have pleaded not guilty.

The enhanced hate crime charges mean the four could face as much as 30 years in prison if convicted, rather than 15 years on previously filed aggravated battery charges. The Miami Herald reports that prosecutors brought the hate crime charges Thursday.

The attack happened April 8 and was captured on surveillance video. Authorities say the video showed the suspects punching two men in the face and knocking them down. The beating left the victims with multiple cuts and bruises.

One alleged victim, Rene Chalarca, told CBS Miami that he and a companion, Dmitry Logunov, were both repeatedly punched.

"We were coming out of the bathroom and they started hitting on us, punching us, and kicking us when we were on the floor. They had no reason to," Chalarca said, who added that the men allegedly used an anti-gay expletive during the attack.