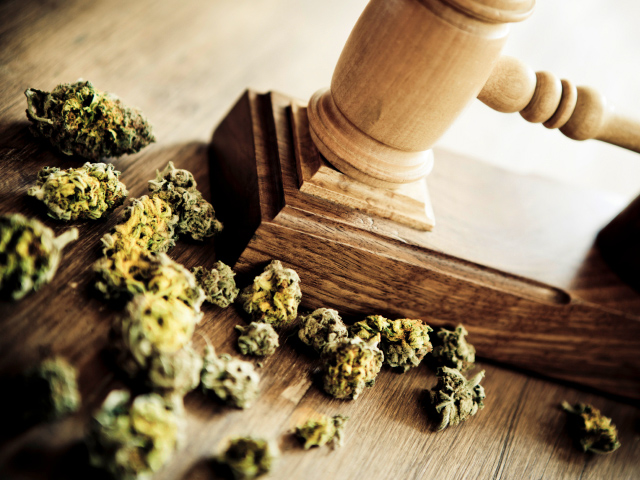 (CBS/AP) NEWPORT BEACH - Four people are charged with kidnapping a California marijuana dispensary owner, torturing him with a blowtorch and cutting off his penis during a robbery because they thought he was burying piles of cash in the desert, authorities said Friday.

Ryan Kevorkian, 34, and Naomi Kevorkian, 33, were arrested Friday in Fresno, a day after the FBI arrested 34-year-old Hossein Nayeri in Prague in the Czech Republic, Orange County authorities said in a statement.

Another man, Kyle Handley, 34, was arrested in October 2012 for the attack that allegedly occurred then.

The four are charged with kidnapping for ransom, aggravated mayhem, torture, burglary and a sentencing enhancement for inflicting great bodily injury. They were being held without bail and could face up to life in prison without possibility of parole if convicted, prosecutors said.

It was not immediately known whether the Kevorkians and Nayeri had obtained lawyers.

Handley pleaded not guilty to the charges last month.

"It is my hope that by bringing to justice these three additional people it will become clear that Mr. Handley was not involved in this demonic criminal enterprise," Robert K. Weinberg, Handley's attorney, said Friday.

Prosecutors said the victim was a prosperous medical marijuana dispensary owner who took some of his pot suppliers -- including Handley -- to Las Vegas last year for an extravagant weekend.

After the trip, Handley told some friends that the dispensary owner was extremely wealthy and they came up with a plan to kidnap and rob him, according to a statement from the county district attorney's office and Newport Beach police.

Four weeks before the kidnapping, the would-be robbers allegedly began shadowing the dispensary owner, following him on frequent trips he made to the desert outside of Palm Springs.

He went out to discuss a possible investment deal, but the four wrongly believed he was driving there "to bury large amounts of cash," according to the statement.

On Oct. 2, 2012, Handley, Nayeri and Ryan Kevorkian went to the man's Newport Beach home, stole cash, bound and beat him and kidnapped him along with his roommate's girlfriend, then drove them out to a desert spot in a van, authorities contend.

Throughout the drive, they allegedly burned the dispensary owner with a blowtorch.

At the spot where the men believed the victim had hidden his money, they cut off his penis, poured bleach on him in an effort to destroy any DNA evidence and dumped him and the woman on the side of the road, authorities alleged.

The three men then drove away with the penis so that it couldn't be reattached, authorities claimed.

"The woman ran over a mile to a main road in the dark, while still bound with zip ties, and flagged down a police car," according to the statement.

The man survived his injuries.

After the crime, Nayeri fled to Iran, where he remained for several months, prosecutors said. He was arrested in Prague while changing flights from Iran to Spain to visit family, authorities said.