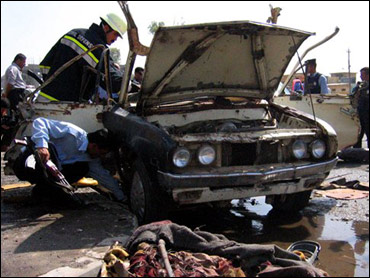 The first two bombs went off in front of two restaurants in the predominantly Shiite neighborhood of Shula in western Baghdad, killing at least 11 and injuring 28. The third — apparently driven by a suicide bomber — ran into a nearby bus station, killing at least eight people and injuring 20, police Lt. Majid Zeki and police Maj. Mousa Abdul Karim said.

A suicide car bomber attacked an Iraqi army patrol in Baghdad's western Ameriyah suburb and killed at least four bystanders, police said. The attack occurred at about 9:45 p.m., said Najim Abid, a police officer in Baghdad's Yarmouk Hospital. The four dead included a woman and a child, he said. There were no Iraqi soldiers among the wounded.

According to police in Shula, the first two bombs went off at 9:30 p.m. in front of the al-Haji restaurant, located next door to a shop selling falafel sandwiches and ice cream — which had been targeted by another car bomb on June 10.

Both bombs targeted people sitting outside the grill restaurant, which sold shish kebabs and other barbecued meats, while the suicide car bomber then ran the third car into the bus station 300 yards away.

On June 10, a car bomb exploded outside the falafel and ice cream shop, a popular hangout for youngsters, and killed 10 people sitting or waiting for the fried chickpea sandwiches, a staple in the Middle East.

The soldiers were killed Tuesday near the city of Ramadi, the military said. They were attached to the U.S. Army's 2nd Brigade Combat Team, which is assigned to the II Marine Expeditionary Force.

Ramadi, an insurgent stronghold, is 70 miles west of Baghdad.

At least 1,727 members of the U.S. military have died since the war began in March 2003, according to an Associated Press count.