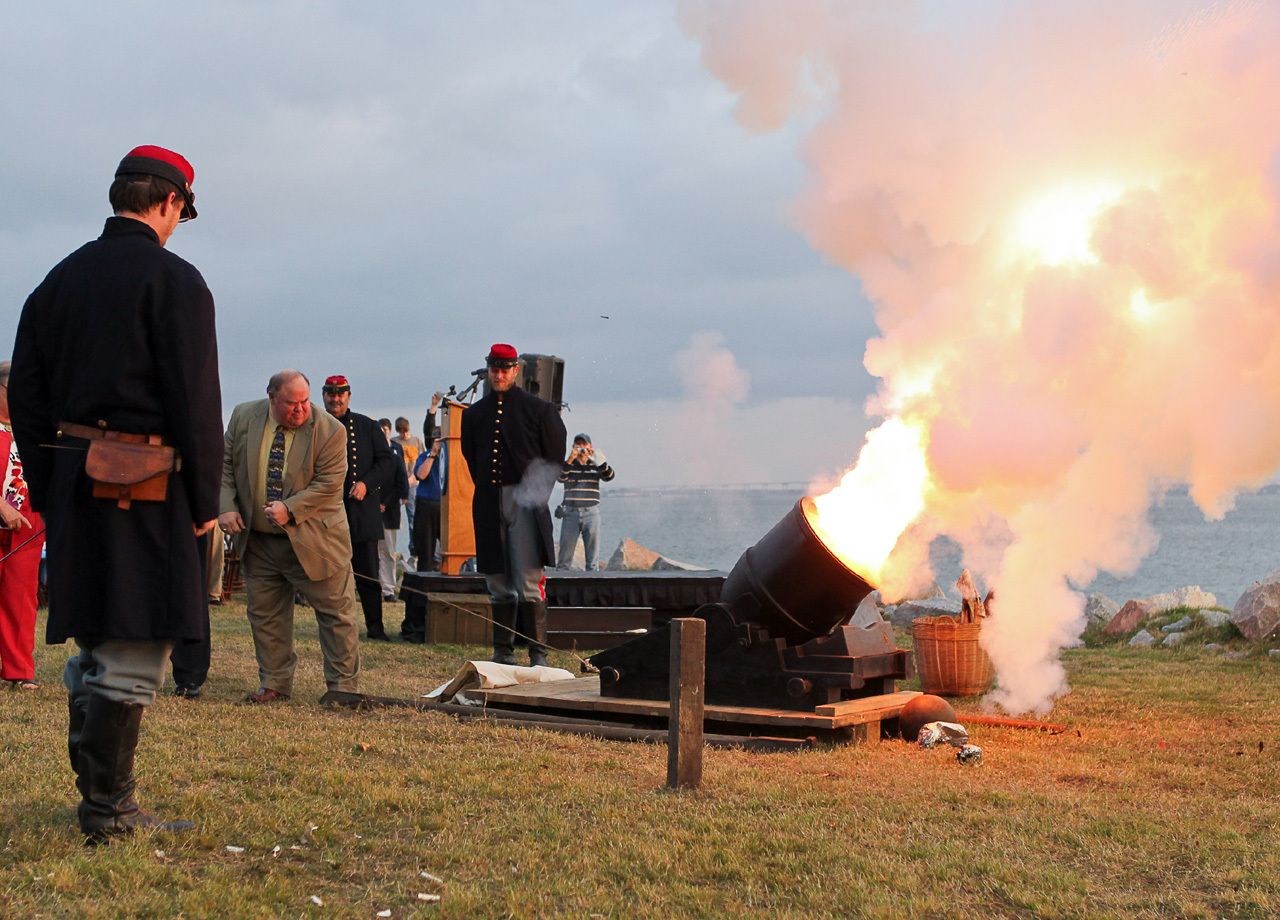 CHARLESTON, S.C. - Cannons boomed at dawn around Charleston Harbor, recreating the bombardment of Fort Sumter that plunged the nation into the Civil War on April 12, 1861.

The South Carolina ceremony Tuesday begins the four-year national commemoration of the 150th anniversary of the nation's bloodiest war.

Around 4 a.m., a single beam of light reached skyward from Fort Sumter.

About half-hour later — about the time of the first shots of the Civil War — there was a second beam signifying a nation torn in two.

An authentic 1847 seacoast mortar (similar to one used by Confederate soldiers against Fort Sumter) was fired on Fort Johnson on James Island at 6:45 a.m. Tuesday. It was answered by cannons from around the harbor.

A Union re-enactor tossed a wreath into the water after which re-enactors in gray fired a 21-gun salute in memory of all who died on South Carolina soil. Two buglers then echoed "Taps."

In a dispatch to The Associated Press in 1861, an unnamed correspondent observed the fort's parapets crumbling under the pounding of artillery. He wrote of gun emplacements being "shot away" and shells falling "thick and fast."

"The ball has opened. War is inaugurated ... Fort Sumter has returned the fire and brisk cannonading has been kept up," the correspondent wrote.

Union troops in the fort surrendered after absorbing 36 hours of Confederate shells.

The war resulted in more than 600,000 deaths, although during the bombardment of Sumter only a Confederate officer's horse was killed.

CBS Affiliate WCSC correspondent Nicole Johnson reports that several Civil War descendants were on hand to mark the sesquicentennial, including William Downs and John Farley. Great-grand-nephews of Lt. Henry Farley, who pulled the trigger of the first shot back in 1861, the two fired closing shots at today's ceremony.

At Fort Moultrie National Monument, more than 300 Civil War re-enactors in period dress were camping out, sleeping in tents and cooking meals by campfire.

"We put a lot of time and effort into the re-enacting. We want people to get the full experience," Bruce Blackman, portraying Lt. Colonel Roswell Ripley, told WCSC correspondent Deja Knight.

U.S. National Park rangers from all over the U.S. have come to Charleston to assist with the 50,000 visitors expected at the Civil War commemoration, which has been in the planning for two years.

The state of the War Between the States is also being commemorated beyond the South.

Bells will be rung in towns across Upstate New York. In Rensselaer County a re-enactment group will hold a ceremonial cannon firing at noon.

New York State contributed the most men during the Civil War - and suffered the most casualties, with more than 53,000 killed out of the 500,000 New Yorkers who served.

In Brooklyn, the Culinary Historians of New York plan to mark the 150th anniversary with a lecture: "Starving the South: How the North Won the Civil War."