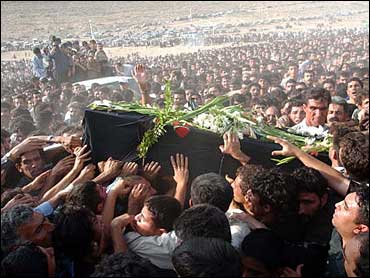 Thousands of mourners wept as Ladan and Laleh Bijani, the formerly conjoined twins, were prayed over by a cleric and then buried in separate graves Saturday, after dying this week during separation surgery.

A note, in Farsi and English, attached to flowers on the coffins read: "Separated. Rest in Peace." One family member fainted during the emotional funeral.

The deaths of the 29-year-old twins, who were joined at the top of their heads, caused sadness around the world, but particularly in their homeland. An estimated 20,000 people arrived for the burial ceremony in the twins' home village, which the girls left at a young age to live in the capital.

Most mourners wore black, though some women were dressed in the long, colorful tribal dresses of the region. They tearfully cried out, "Today is the day of mourning." Others mourned, "Oh! Laleh and Ladan, where are you? The country is in grief."

People came from towns and villages across the region, and a 1.8-mile convoy of vehicles packed the road from nearby Firouzabad to Lohrasb, 680 miles southwest of Tehran, as the coffins were taken to the burial site.

The sisters had captivated the nation with their bravery and charm, and were admired even in death when it was revealed that they left wills donating all their property to blind children and orphans.

A government official proposed a "National Day of Love" for the twins' Dec. 31 birthday. Rahim Ebadi, head of the National Youth Organization, made the proposal in a letter to President Mohammad Khatami, the English-language Iran Daily reported.

The twins died Tuesday in Singapore, where they underwent a 54-hour operation. They died within 90 minutes of each other after surgeons separated their heads but failed to control bleeding.

Across Iran, people grieved openly on city streets, halting work and parking their cars to cry when radio and TV interrupted normal programming to announce the news. Khatami also paid tribute to the twins' resolve and patience.

On Thursday, hundreds of mourners paid their respects at Tehran's Grand Mosque in a reception normally reserved for slain soldiers and prominent figures.

In their home village, people placed photos of the twins and placards expressing condolences on lamp posts and buildings.

The sisters left Iran seven months ago to prepare for the operation, insistent on the surgery despite the risks. Before the operation, they joked and said they wanted to look each other in the face without a mirror.

A neurosurgeon who assisted in the attempt to separate them said Friday the operation should have been done in stages over several weeks.

Performing the surgery as a marathon procedure felt like "heading into a dark jungle to hunt a hungry tiger with no gun," said Dr. Benjamin Carson, director of pediatric neurosurgery at Johns Hopkins Children's Center in Baltimore.