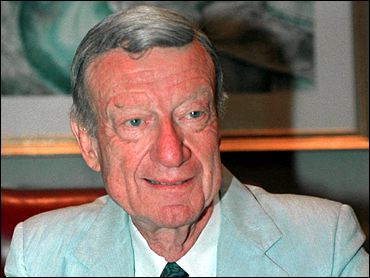 Former U.S. Sen. William V. Roth Jr., a fighter for tax cuts during his five terms in Congress and creator of a popular retirement account that bears his name, has died. He was 82.

"It's a sad day for Delaware," Biden said. "This was one of the truly great figures in Delaware politics."

Roth was a relentless champion of tax cuts during his time in Washington and also oversaw high-profile inquiries into both alleged taxpayer abuses by the Internal Revenue Service and Pentagon overspending that uncovered a wrench costing $9,600 and a toilet seat costing $640.

The Republican co-authored the 1981 Kemp-Roth tax cuts, but he was best known as the creator of the Roth Individual Retirement Account, or Roth IRA.

Before he lost the race in 2000 for a sixth term in the U.S. Senate, Roth was one of the longest-tenured politicians in Delaware's history and the state's longest-serving U.S. senator. He was defeated by two-term Gov. Tom Carper.

Roth was a native of Montana and became a political icon in his adopted state of Delaware, where he moved in 1954.

During World War II, he had served in an Army intelligence unit in the Pacific, eventually receiving the Bronze Star for meritorious conduct. He attended Harvard after the war and became a lawyer.

Roth won his first seat in Congress in 1966, when he defeated Democratic U.S. Rep. Harris B. McDowell Jr. He served two terms in the House before taking over the Senate seat vacated by Sen. John J. Williams, a Republican.

One of his first acts in Congress was to comb through the government agencies that provide grants, small business loans and other money. He finished with what became known as the "Roth Catalog," originally published in the Congressional Record in 1968, a guide now updated annually as "The Catalog of Federal Domestic Assistance."

In 1981, early in his Senate career, Roth joined former Congressman Jack Kemp to usher in a sweeping tax cut that conservatives hailed as the spark for the robust economy of the 1990s but critics blamed for the spiraling national deficits under President Ronald Reagan.

Roth later focused his attention on the tax collectors, leading a series of high-profile Congressional hearings into the workings of the Internal Revenue Service.

Although Roth insists his inquiry reigned in an agency out of control, the hearings were ultimately unable to substantiate any specific claims of abuse by IRS workers. He later authored a 1999 book, "The Power to Destroy," a look at the IRS.

In 1983, as chairman of the Senate Governmental Affairs Committee, he helped to expose wasteful defense spending, drawing attention to overpriced spare parts by decorating a Christmas tree with screws, nuts and wrenches. The total price tag was $101,000.

"It costs us $110 to buy the same parts at local hardware stores and supply houses," Roth said at the time.

Roth's crowning legislative achievement was the creation of the Roth IRA, an individual retirement account which allows people to invest taxable income that can be withdrawn tax-free in retirement.

Despite his achievements in the Senate and 99 percent name recognition among voters, Delaware sent Roth into retirement in 2000 by giving former Gov. Tom Carper an overwhelming victory in what was considered a battle of Delaware titans. At the time, Roth was 79, the third-oldest member of the Senate.