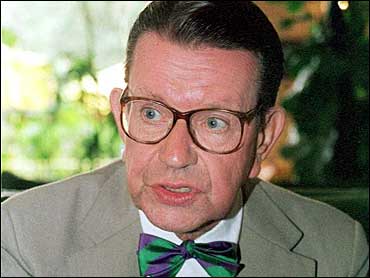 Paul Simon, the bow-tie-wearing missionary's son who rose from crusading newspaper owner to two-term U.S. senator and presidential aspirant, died Tuesday, a day after undergoing heart surgery. He was 75.

Simon's daughter confirmed his death at St. John's Hospital in Springfield, according to Peter Alexander, the law school dean at Southern Illinois University, where Simon started a public policy institute after his retirement.

Simon had a single bypass and heart valve surgery at the hospital's Prairie Heart Institute on Monday.

Simon announced in 1987 that he was seeking the Democratic nomination for president the following year. He suspended his campaign in April 1988 after having won only his home state's primary.

"I leave the field of active campaigning with no regrets for having made the race," he said, "because it has been an exhilarating experience to get to know our nation better." He later wrote a book about the campaign, "Winners and Losers."

When he announced in late 1994 that he would not seek a third term in 1996, he said: "I have an obligation to the people of Illinois, to the Senate and to myself to leave the Senate while I am still eager to serve, not after I tire of serving."

He said he enjoyed campaigning and making policy but not fund-raising, estimating he would have had to spend a third of his time raising money if he had decided to run in 1996.

Simon was a bespectacled, slightly rumpled man with a strong reputation for honesty, a politician who began disclosing his personal finances in the 1950s. He had the sober, straight-laced bearing of a Sunday school teacher and wrote 13 books.

Simon blended fiscal conservatism and social liberalism. Raised during the Depression, the son of a Lutheran minister, he saw the great needs facing the country and how government responded through New Deal programs.

"Government is not the enemy," he said in 1988. "Government is simply a tool that can be used wisely or unwisely. ... We can do better, my friends."

His family struggled, though not as much as others. "I learned that you have to be careful with money," he said.

That explained his reputation as a "pay-as-you-go" Democrat who would rather raise taxes than rely on deficit financing — and why he so long championed a balanced budget amendment.

"To be a liberal doesn't mean you're a wastrel," said Simon, citing the words of a political mentor, Sen. Paul Douglas of Illinois.

In the Senate, Simon helped overhaul the federal student loan program to enable students and their families to borrow directly from the government.

As a crusader against television violence, Simon successfully pushed the industry to monitor the amount of violence on the screen.