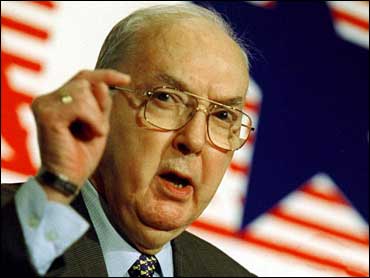 Jesse Helms, the five-term Republican Senator from North Carolina, has died. He was 86.

Helms died in Raleigh at 1:15 this morning, according to the Jesse Helms Center in Wingate, North Carolina.

Helms built a career along the fault lines of racial politics and battled liberals, Communists and the occasional fellow Republican during his decades in Congress. He was slowed in later age by a variety of illnesses, including a bone disorder, prostate cancer and heart problems.

Helms retired from the Senate in 2003.

"Watching Jesse Helms move through a crowd reminded you of a tin lizzy - old-fashioned, cranky, proud of it. He never tried to avoid the potholes of American politics. He just lurched through them," said CBS News Chief Washington correspondent and "Face the Nation" host Bob Schieffer.

CBS News correspondent Bob Fuss called Helms a politician who knew no middle ground, one of the most conservative men to ever sit in the Senate - and proud of it. Bigger than life in his native North Carolina, he sometimes seemed that way to his political enemies in Washington, too.

Born in Monroe, N.C. in 1921, Helms worked as a reporter and a Navy recruiter before entering politics after World War II, when he worked for North Carolina Senator Willis Smith in Washington.

He returned to Raleigh where he won a seat on the city council, but became best known when he joined Capitol Broadcasting Company, the owner of WRAL (which is now a CBS affiliate), in 1960.

Over the next decade, Helms offered editorial messages, broadcast after the nightly newscasts, which were decidedly ideological - in one, he proposed building a wall around UNC-Chapel Hill (which he dubbed "the University of Negroes and Communists") to contain its "liberal" influence.

In 1972, Helms - who had switched from the Democratic Party to the Republicans because of differences over civil rights legislation - ran for the U.S. Senate, winning on the coat-tails of President Nixon's landslide re-election. He was the first Republican Senator from North Carolina in decades.

Like most Southern politicians of his era, Helms began as a segregationist but later tried to reach out to African Americans.

But on most issues, he never gave an inch.

For 30 years Helms was the voice of the right in the Senate, battling communism, feminism and affirmative action. "Senator No," as he was sometimes known, cut funding for the United Nations and for what he considered "dirty art."

Helms served as chairman of the Agriculture Committee and Foreign Relations Committees when the Republicans held the Senate majority, using his posts to protect his state's tobacco growers and other farmers and place his stamp on foreign policy.

Helms never lost a race for the Senate, but he never won one by much, either, a reflection of his divisive political profile in his native Southern state.

In 1990 his Senate campaign aired a controversial commercial in which a white man crumples up a rejection letter, having lost out on a job to a less-qualified minority "because of a racial quota." Helms defeated Harvey Gantt, an African American and former mayor of Charlotte.

"The tension that he creates, the fear he creates in people, is how he's won campaigns," Gantt said several years later.

Helms also played a role in national Republican politics - supporting Ronald Reagan in 1976 in a presidential primary challenge to then-President Gerald R. Ford. Reagan's candidacy was near collapse when it came time for the North Carolina primary. Helms was in charge of the effort, and Reagan won a startling upset that resurrected his challenge.

Helms reached the height of his power as chairman of the Senate Foreign Relations Committee beginning in 1994, where his distrust extended from the Russians to our own State Department.

He took a dim view of many arms control treaties, opposed Fidel Castro at every turn, and supported the contras in Nicaragua as well as the right-wing government of El Salvador.

The U.N.-basher was never shy about wielding power.

Richard Holbrooke, U.S. ambassador to the U.N. under President Clinton, said of Helms, "I have seen him kill nominations. I've seen him kill treaties. But all I can say is he is true to his principles."

Helms spent years fighting to keep the Panama Canal, and was notorious for blocking ambassadorial appointments of people he didn't approve of … and it didn't matter if they were nominated by a Republican president.

Former Senate leader Bob Dole described Helms' style: "He sticks to his guns and he doesn't mind firing them, either."

During the 1990s, Helms clashed frequently with President Bill Clinton, whom he deemed unqualified to be commander in chief.

Asked to gauge Clinton's performance overall, Helms said in 1995: "He's a nice guy. He's very pleasant. But ... (as) Ronald Reagan used to say about another politician, 'Deep down, he's shallow.'"

Helms also clashed with fellow Republicans over the years, and he was unafraid of inconveniencing his fellow senators - sometimes all of them at once.

"I did not come to Washington to win a popularity contest," he once said while holding the Senate in session with a stalling tactic that delayed the beginning of a Christmas break.

Helms occasionally opted for compromise in later years in the Senate, working with Democrats on legislation to restructure the foreign policy bureaucracy and pay back debts to the United Nations, an organization be disdained for most of his career.

And he softened his views on AIDS after years of clashes with gay activists, advocating greater federal funding to fight the disease in Africa and elsewhere overseas.

As he aged, Helms was slowed by a variety of illnesses, including a bone disorder, prostate cancer and heart problems, and he made his way through the Capitol on a motorized scooter as his career neared an end.

Helms' public appearances dwindled as his health deteriorated. When his memoirs were published in August 2005, he appeared at a Raleigh book store to sign copies but did not make a speech.

In April 2006, his family announced that he had been moved into a convalescent center after being diagnosed with vascular dementia, in which repeated minor strokes damage the brain.

Towards the end of his Senate career, Helms was asked how he'd like to be remembered:

"I would like for them to say, 'Well, he did the best he could.' If they say that, that'd be enough."