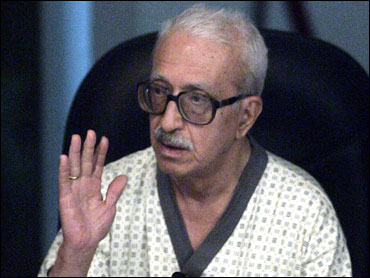 Saddam Hussein's former foreign minister, Tariq Aziz, was convicted of crimes against humanity and sentenced to 15 years in prison Wednesday for the 1992 execution of 42 merchants accused of price gouging while Iraq was under U.N. sanctions.

The conviction was the first against Aziz, who for years was the former regime's public face to West.

Wednesday's conviction came just over a week after Aziz was acquitted of being responsible for a brutal crackdown on Shiite protesters that followed the 1999 assassination of a revered cleric, Grand Ayatollah Mohammed Sadeq al-Sadr - the father of anti-U.S. cleric Muqtada al-Sadr.

Three other former regime officials were sentenced to death in that case, including Chemical Ali. It was his third death sentence for atrocities under Saddam's rule.

Aziz, the only Christian in Saddam's mostly Sunni Muslim regime, became internationally known as Saddam's defender in the 1980-1988 Iran-Iraq war, the 1990 Iraqi invasion of Kuwait, the 1991 Gulf War and in the run-up to the 2003 U.S.-led invasion that toppled the regime.

Aziz, who was No. 25 on the deck of cards of wanted regime figures issued after Saddam's ouster, surrendered to American forces on April 25, 2003.

The trial, which opened in April of last year but faced many delays, deals with the execution of the 42 merchants accused by Saddam's government of being behind a sharp increase in food prices when the country was experiencing hardships under strict U.N. sanctions.

The merchants were rounded up over two days in July 1992 from Baghdad's wholesale markets and charged with manipulating food supplies to drive up prices at a time when many Iraqis were suffering economically. All 42 were executed hours later after a quick trial.

Judge Raouf Abdul-Rahman - a Kurd who sentenced Saddam to death by hanging - presided over the trial.

Three other defendants got sentences of life in prison, 15 years and six years.