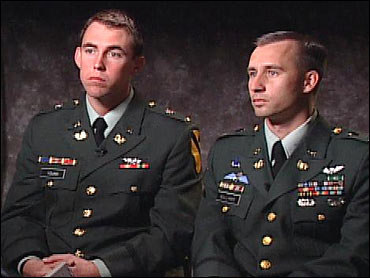 Chief Warrant Officers David Williams and Ronald Young Jr. are Apache helicopter pilots who came home from Iraq after experiencing just about everything that can happen to a soldier.

The two pilots were shot down in a devastating firefight on March 24, shot at as they fled on foot, captured, held prisoner, beaten, displayed as trophies, rescued and hailed as heroes - all within just 22 days.

Last May, they shared their story for the first time with Correspondent Dan Rather - a harrowing account of everything that war can be.

Their tale begins with a ferocious battle deep inside Iraq that brought their Apache down.

“I remember taking a round across the top of my left foot. It had come through the aircraft and split open the top of my boot,” says Williams. “Fortunately, I still have my toes, but the powder burns, and it nicked my big toe and I think that round is what really did us in.”

Williams and Young flew into a firestorm and survived, with their humor intact, their friendship strong and their loyalties clear.

“There are still guys over there and we want them in everyone’s prayers and to remember those that have fallen,” says Young. “But also, we do this job because we love it.”

They do not believe they are heroes, but they believe their unit, 1st Battalion, 227th Aviation Regiment, out of Fort Hood, Texas, performed heroically. They want Americans to know it.

On the night of March 23, 18 Apache helicopters set out across a sea of sand. The Apaches flew low and fast, taking fire and firing back, clearing the decks for American ground troops.

What none of the pilots knew on the night of March 23 was that this time, the Iraqi Republican Guard had planned an ambush, using cell phones to communicate the Apache positions as the helicopters swept toward Karbala.

There, in the darkness, a deadly hornet’s nest was waiting.

“It’s the wildest laser show you’ve ever seen in your life, all that stuff going on,” says Young. “And the next thing you know, just that fast, you’re in it. And bullets are going by you. It’s just intense.”

“I remember Ron saying, ‘Man, don’t fly through that.’ And I said, ‘I’m not going to fly through that,’” remembers Williams. “And it was like as soon as I said that, somebody opened up on us. And that’s when it all went downhill from there.”

Lance McElhiney is the most senior Apache pilot in the unit, a veteran of Vietnam and the first Gulf War.

He describes the Iraqis they encountered in the firefight as tough enemies --more sophisticated, more determined, and more deadly than most Americans might think.

“This was a smart enemy. They had learned from 12 years ago. They had shut down the power quads in the city and when we got deep into the city, whack the lights went on,” says McElhiney. “We were skylighted and they started shooting. If people saw the pictures of Baghdad, if they can remember 12 years ago, tracers in the sky, we took about 10 times more. And we stayed there for about 42 minutes, fighting the enemy.”

Williams and Young, like the other Apache teams, were taking heavy fire.

“I didn’t even know it. And all I could think to myself was, ‘Holy crap. Oh, my God, I can’t believe this.’ And I mean bullets are whizzing within inches of your head.”

Eventually, their Apache weapons system got knocked out. Young was unable to return fire and Williams struggled to stay in the air -- by then, missing one engine and running out of options.

“I’m trying to get a radio call out to let somebody know we’re on foot. And that’s exactly what I say, we’re on foot,” remembers Young. “And you can still hear the rounds. You can see the rounds coming over the top of the aircraft, still. And he pulls the power levers off and I hear, ‘Get out.’ And within a split second, I mean, it was the like the smoothest move I’ve ever done in my life, I pretty much pushed myself out of the cockpit, undid my seat belt, yanked my helmet out of the cannon plug and I was standing out there. I don’t think either one of us remember the impact.”

Pilots Fred Polidore and Matthew Stauffer were trying to provide cover for the helicopter carrying Williams and Young.

“Lance called me over the radio and said, ‘Did you hear Ron and Dave went down,’” remembers Stauffer.

“We stayed in the area looking for our guys until we had nothing working,” says Polidore. “No weapons system, we hear engine two is out, we had no choice but to go back.”

At the end of every operation, the Apaches were supposed to gather. But on the morning of March 24, one was missing.

“I sat by the tail boom of my aircraft. I watched the sun come up,” remembers McElhiney. “And I didn’t show much emotion in front of people, but I cried.“

But Williams and Young were not as lucky. In a field 50 miles away from their friends, the downed pilots were running for their lives.

“At this point, we’re running through weeds and stuff,” says Young. “Kind of tripping over each other, just trying to get away from the aircraft.”

“The Iraqis could hear that the aircraft went down,” adds Williams. “And they were converging very quickly.”

“But you’ve got to run. You have to save your own life at that point,” says Young. “And it was up to me and Dave to save our own lives.”

The two pilots remember stumbling over each other to escape. Williams and Young both had 9 mm pistols. “I had mine out and I was ready to go,” says Young.

They heard Iraqis approaching, and the pair crawled into a ditch.

“They got so close that we could hear them talking,” says Williams. “What we do is we tried to lay, we actually laid down in the mud, face down in hopes that they would have just walked by and missed us ... You know I could feel my heart ... and I was just praying, ‘Please, please, just walk by.’ Neither one of us wanted to be a prisoner.”

The two started whispering. “What do you want me to do,” Young remembers saying. “At this point, you know, it’s still keep yourself alive.

But Williams says it was obvious that the Iraqis knew where they were located.

“I kind of slowly turned my head to look at them,” he says. "We knew they had a lot more firepower than we did. I mean, we were outnumbered. And I slowly raised my left hand up.”

Next: What happened to David Williams and Ronald Young inside Iraq, in the hands of the enemy?

Part II: In The Hands Of The Enemy
Part III: The Rescue