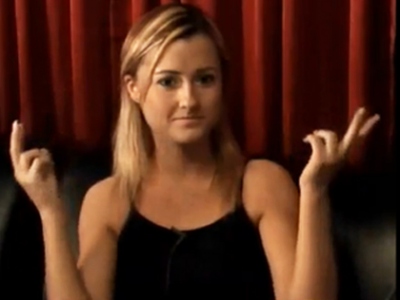 While Lee said she did not initiate sexual talk with Weiner, she did say the congressman's messages were often sexually suggestive.

"I have wardrobe demands too, I need to highlight my package," Weiner allegedly wrote in an email read by celebrity attorney Gloria Allred, Lee's press representative.

"We did communicate on a fairly regular basis," said Lee. "However, I did not sext Anthony Weiner. I did not send photos to him or receive any from him," reports CBS station WCBS.

Lee said that Weiner contacted her in March after she began following him on Twitter.

Allred said that several times Weiner tried to take the conversation to another level, always referencing his "package." Lee and the congressman spoke on the phone once, Allred said, when he gave her advice a couple weeks ago on how to handle the crush of media inquiries.

Lee said it was on Thursday, June 2, that Weiner called her and told her to avoid the media.

"He asked me to lie" at the beginning of the scandal, Lee said. "I refused to lie, so I went into hiding."

Entertainment website TMZ published messages it says Weiner sent to Lee about how to mislead the press about their relationship.

Lee said she thinks Weiner should resign for lying to the public about the sexting scandal, saying "It might have never turned into this if he told the truth."

Weiner has taken leave from the House and is said to be seeking treatment. President Barack Obama and House Democratic leaders have pressed him to resign.