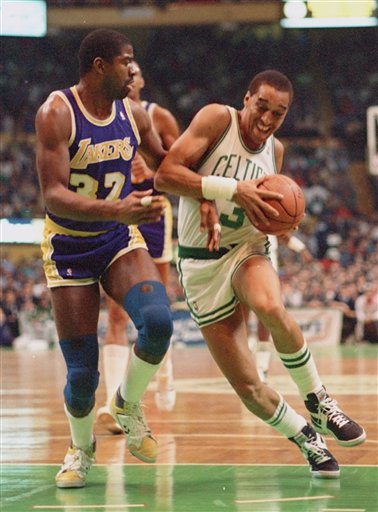 Dennis Johnson, the star NBA guard who was part of three championships and teamed with Larry Bird on one of the great postseason plays, died Thursday, collapsing after his developmental team's practice. He was 52.

Paramedics tried to resuscitate him for 23 minutes before he was taken to a hospital and pronounced dead, Hassinger added. Mayra Freeman, a spokeswoman for the medical examiner's office, said there will be an autopsy.

"He was one of the most underrated players in the history of the game, in my opinion, and one of the greatest Celtic acquisitions of all time," said former Boston teammate Danny Ainge, now the Celtics' executive director of basketball operations.

"D.J. was a free spirit and a fun personality who loved to laugh and play the game. We had spoken at length just the other night about basketball and his excitement about coaching the Austin Toros. "

Johnson played Toros player Jamar Smith in a game of 1-on-1 after practice and everything seemed normal, player Anthony Fuqua said.

"He was being Coach Johnson out there talking trash, playing basketball, dribbling around and shooting," Fuqua said. "Everything seemed fine. We're all in shock."

Toros spokeswoman Perri Travillion said she was talking with Johnson on the sidewalk outside the building when he collapsed. Johnson was joking about getting a parking ticket.

"We were laughing," she said. "He just collapsed."

Travillion said she called 911 and that Johnson never regained consciousness. She said Johnson did not appear to have overexerted himself at practice and didn't complain of any discomfort before he collapsed.

Johnson, a five-time All-Star and one of the top defensive guards, was part of the last Boston dynasty. He spent 14 seasons in the league and retired after the 1989-90 season. He played on title teams with the Celtics in 1984 and 1986 and with the Seattle SuperSonics in 1979, when he was the NBA finals MVP.

"Whether he was leading his teams to NBA championships or teaching young men the meaning of professionalism, Dennis Johnson's contributions to the game went far beyond the basketball court," NBA commissioner David Stern said. "Dennis was a man of extraordinary character with a tremendous passion for the game."

Johnson was a favorite teammate of Bird's, and the two were part of one of the most memorable plays in Celtics history.

During the fifth game of the 1987 Eastern Conference finals against Detroit, Bird stole Isiah Thomas' inbounds pass under Boston's basket and fed Johnson, who drove in for the winning layup. Boston won the series in seven games but lost to the Los Angeles Lakers in the NBA finals.

"Dennis was a great player, one of the best teammates I ever had, and a wonderful person," said Bird, now president of the Indiana Pacers. "My thoughts and condolences are with his family at this difficult time."

Bill Laimbeer, the center on that Pistons team, remembered Johnson as a "great player on a great ballclub."

"He played with passion and grit," Laimbeer said. "It was fun to play games like that. You always enjoyed it. It made for not only great games, but great entertainment."

In the 1984 finals, Johnson guarded Magic Johnson effectively in the last four games. In 1985, he hit a last-second jumper against Los Angeles that won the fourth game. In 1986, he was part of a team that featured four Hall of Famers _ Bird, Kevin McHale, Robert Parish and Bill Walton.

"He was truly one of the good guys to play in the NBA, and he was a great teammate who was fun to be around," McHale said.

Johnson had a reputaion for delivering in big games.

"Dennis was a great player for the Sonics. He helped us win a championship and was the MVP of the finals," said former Seattle coach Lenny Wilkens, now the Sonics' vice chairman. "But more importantly, he was a tremendous person. He seemed to be enjoying coaching in Austin, and was in great spirits. He's left us way too soon."

Johnson made one all-NBA first team and one second team. Six times he made the all-defensive first team, including five consecutive seasons (1979-83).

"As far as a person, he was a great competitor," Sonics teammate Jack Sikma said. "He wouldn't let things pass. He would cause some friction if he felt strongly about something, but with our team that was a good thing."

He is survived by his wife, Donna, sons Dwayne and Daniel, and a daughter, Denise.