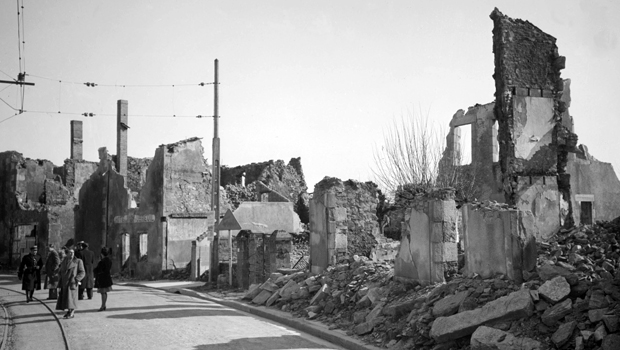 BERLIN -- German authorities said Wednesday they have charged an 88-year-old former member of an SS armored division with 25 counts of murder over allegations that he took part in the largest civilian massacre in Nazi-occupied France.

Cologne state court spokesman Achim Hengstenberg said suspect Werner C., whose last name wasn't given in accordance with German privacy laws, was also charged with hundreds of counts of accessory to murder in connection with the 1944 slaughter in Oradour-sur-Glane in southwestern France.

Dortmund prosecutors allege that the suspect shot 25 men as part of a firing squad, and then helped as troops blockaded and then set fire to a church, in which dozens of women and children were burned alive.

In total 642 men, women and children were killed.

The suspect's attorney, Rainer Pohlen, told The Associated Press his client doesn't deny being at the village but said he never fired a shot that day and was not otherwise involved in any killings.

"My client contests any participation in this massacre, which he finds a truly terrible act," he said, adding that he had fully cooperated in giving statements to investigators.

The court now needs to decide whether to move ahead with a trial, but the suspect first has until March 31 to respond to the charges.

If the case does go to trial, it is possible it would be held in a juvenile court because the suspect was only 19 at the time.

The suspect was part of the 3rd Company of the 1st Battalion of the "Der Fuehrer" regiment of the fanatical SS' "Das Reich" division.

On June 10, 1944 - just four days after the D-Day landings in Normandy - the company attacked Oradour-sur-Glane in reprisal for the French Resistance's kidnapping of a German soldier.

The troops herded the civilians into barns and into the church, blocked the doors and then set fire to the entire town. Those not killed in the blazes were shot as they tried to flee, though a handful managed to escape.

Oradour-sur-Glane today remains a phantom village, with burned-out cars and abandoned buildings left as testimony to its history.

Gauck told a crowd there at the time that he shared their "bitterness over the fact that the murderers have not been brought to justice."