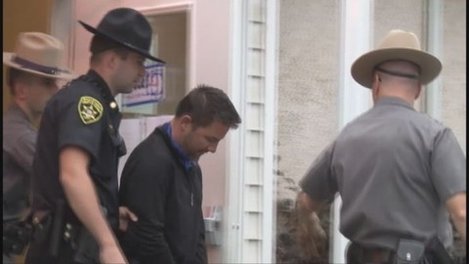 CATON, N.Y. -- A former minor league hockey player has been charged with killing his wife inside their upstate New York home, authorities said.

The Steuben County Sheriff's Office said deputies and state troopers responded to Thomas Clayton's home in Caton, near the Pennsylvania border, after he called 911 early Tuesday and said he found his wife dead.

Kelley Clayton, 35, was discovered on the floor with severe facial trauma, officials said.

The couple's two young children were home. The district attorney's office said the children were being cared for, but no details were released.

Thomas Clayton, 37, was charged with second-degree murder. He was being held Wednesday in the county jail without bail.

It couldn't be determined from the district attorney's office if he has a lawyer who could comment on the charges.

The sheriff's office said Kelley Clayton's body was taken to the Monroe County medical examiner's office for an autopsy.The cause of death hasn't been released.

Clayton is a Binghamton native who played hockey at Niagara University, graduating in 2002.

He spent parts of four seasons with the Elmira Jackals, a mid-level minor league hockey team, from 2002 to 2006, followed by a season with the Quad City Mallards.

Kelley Clayton, an Elmira native, met her husband while he was playing for the Jackals, according to a 2014 Elmira Star-Gazette story on six former Jackals players who stayed in the area after retiring from minor-league hockey.

Thomas Clayton owns and operates a fire and water damage restoration franchise in Elmira, according to the newspaper.