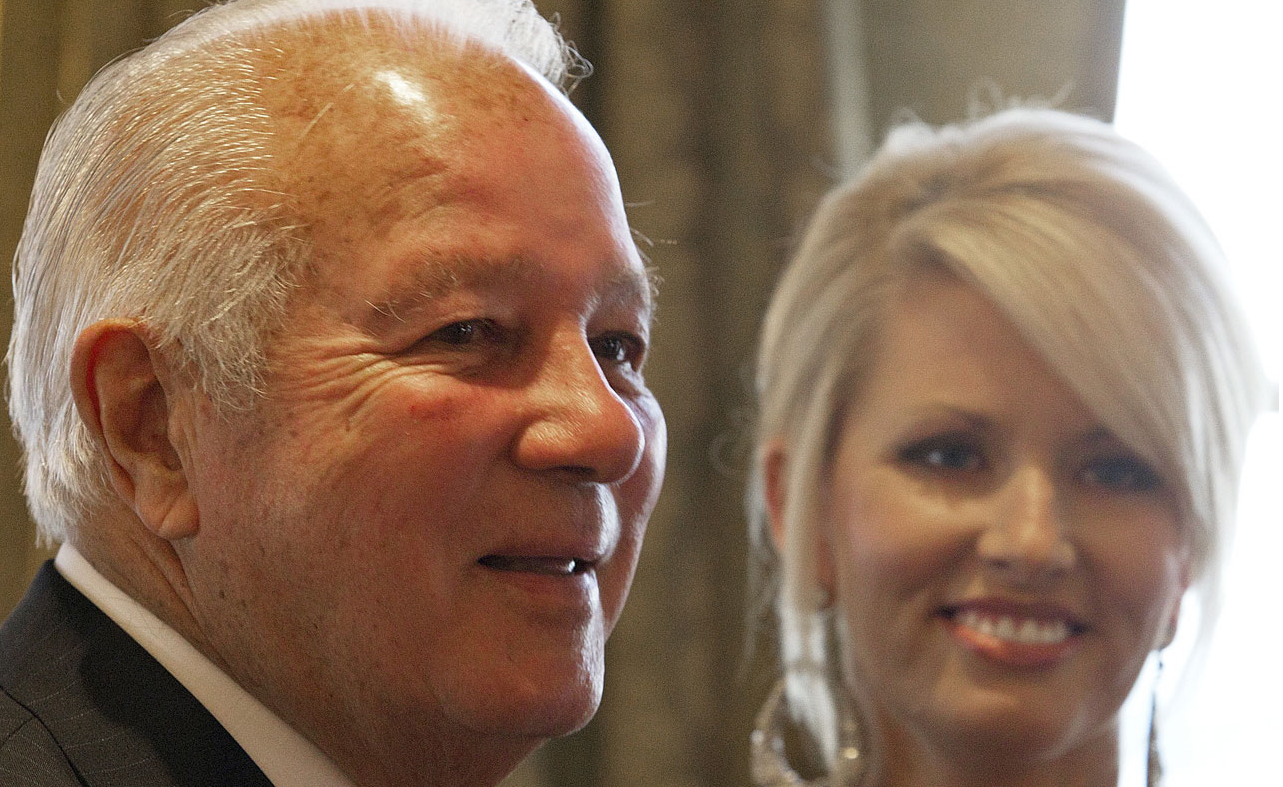 BATON ROUGE, La. - Three years after his release from a federal prison, 86-year-old former Gov. Edwin Edwards, D-La., announced Monday that he will enter the race for Louisiana's 6th Congressional District, ending months of speculation about his political future.

Edwards made the announcement at a meeting of the Press Club of Baton Rouge. He entered a crowded meeting room with his third wife, Trina, more than 50 years his junior. He pushed a baby carriage with their infant son, Eli Wallace Edwards, born last August.

He joked about his age, saying he heard that a Florida political candidate is 101 years old. "By the time I'm his age I'll be in my seventh term," he said.

And he assured reporters and supporters that he is eligible for congressional office despite his criminal conviction in 2000.

"I'm positive I can run. I'm confident I can win," he said, adding that he expects to earn a runoff spot in what looks to be a crowded field.

Between quips, he struck a serious tone. A lifelong Democrat, he sounded as though he was shaping a platform aimed at swaying voters in a conservative district that leans Republican. He backs the Keystone XL oil pipeline. He was critical of Democratic President Barack Obama's health care law, saying it was "fraught with pitfalls" and failed to allow people to keep insurance policies they like.

Still, he embraced parts of the law, including prohibitions against denying insurance to people because of pre-existing conditions. And he said he would work to reverse Gov. Bobby Jindal's refusal to accept expanded Medicaid coverage under that law, saying working poor people and the unemployed need such coverage.

Edwards is running for a seat being vacated by Republican Bill Cassidy, who is running for Senate against incumbent Democrat U.S. Sen. Mary Landrieu. The 6th District stretches from Pointe Coupee Parish down into Terrebonne and Lafourche parishes, containing most of the metropolitan Baton Rouge area. It is considered a strong GOP base.

At least eight candidates have filed paperwork with the Federal Elections Commission, nearly all of them Republican, including state Sen. Dan Claitor and Jindal's former coastal adviser Garret Graves.

The state Republican Party quickly released a statement lambasting Edwards and his party, saying the former governor brought fame to the state "for all the wrong reasons" and chiding Democrats for failing to find a credible candidate.

"The Edwards Administration brought Louisiana higher taxes, increased gambling and a culture of corruption that has harmed our image and business climate for decades," the statement said.

Edwards served two terms as governor in the 1970s. He was re-elected in 1983 and made another comeback for a fourth term in 1991, overcoming scandals of prior years to defeat David Duke, a former Ku Klux Klan leader who had once expressed Nazi sympathies. The campaign was dubbed "the race from hell" by some in the media. A bumper sticker made clear the unhappiness many voters had with the choice between a former klansman and a governor who by then had already been tried for alleged corruption: "Vote for the crook. It's important," it said.

Edwards was the dominant figure in Louisiana politics for much of the late 20th century despite a series of scandals that resulted in numerous investigations and four federal trials, one of which resulted in a conviction in 2000. That case arose from the licensing of riverboat casinos during his final term. He spent eight years in prison for the fraud and racketeering case.

Before and after his prison term, he defended himself as a victim of an unfair federal judge in Baton Rouge, perjured testimony by former friends who had sought casino licenses and an overzealous federal government. Federal prosecutors have denied all of those accusations.

Edwards regained the public eye soon after leaving prison in 2011 after he married his wife and starred with her in a short-lived reality TV series.