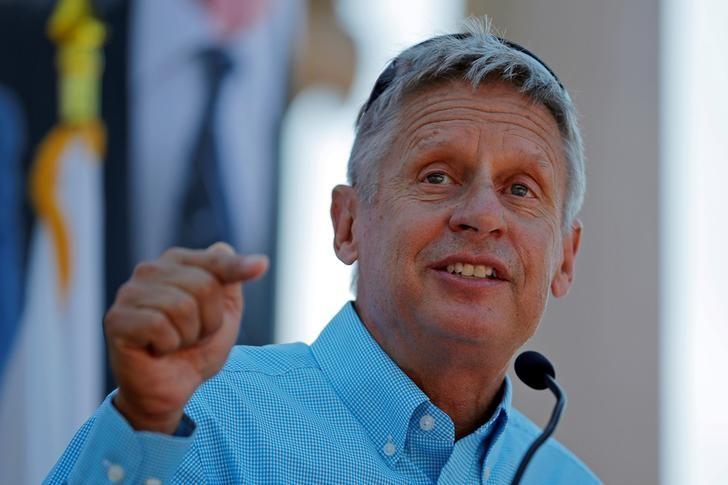 Johnson, a former two-term governor of New Mexico, was added to the state's list of Senate candidates as final paperwork was being filed with election officials.

His campaign manager said a formal announcement would come soon.

Johnson remains popular in New Mexico and his entry into the U.S. Senate race that Democrats have been favored to win could complicate the party's national effort to hold seats or make gains in the chamber.

Johnson's 2016 presidential bid as a Libertarian sputtered after a live-television gaff on foreign policy. Democrats saw the presidential run, with currents of social liberalism, as a bane to their party, even as Johnson criticized Trump for his treatment of women and border-wall proposal.

Elected and re-elected governor of New Mexico as a Republican, Johnson stayed true to a small-government philosophy while vetoing more than 700 bills. His open advocacy for legalized marijuana broke mainstream 1990s political taboos and made him a national curiosity.

"Here's a guy who vetoed close to 900 bills and simply would not accept any increase in the size and scope of government," Adair said. "That seems to be right in the wheelhouse of measurable disgust with both the left and the right. He may be the perfect third-party option right now."

Johnson, a 65-year-old fitness enthusiast who has summited Mount Everest and this summer completed a grueling 2,700 mile (4,350 kilometer) bicycle race along the Continental Divide, says Democrats and Republicans alike are guilty of deficit spending and military overreach that he says limits economic freedom.

A campaign ad rolled out Monday by the Elect Liberty PAC touts Johnson's image as a self-made businessman who is disciplined and competitive.

"Over 1 million New Mexicans are on various forms of health care help from the federal government," she said. "We need to take care of those people."

In New Mexico, Johnson has been known for direct positions on policy and occasionally goofy behavior, once twirling a toy pig above his head at a news conference as he refused to sign a state budget proposal — unless pigs were to fly.

In a Senate closely divided between Republicans and Democrats, Johnson's possible swing vote could hold outsized influence over national policy, said attorney A. Blair Dunn — a Johnson ally and the Libertarian candidate for attorney general.

"Gary basically becomes a power fulcrum, especially if he gets together with people like Mike Lee, Rand Paul, Cory Booker," Dunn said.

Registered Libertarians make up a tiny sliver of the New Mexico electorate — less than 1 percent of registered voters. But the share of unaffiliated voters has steadily grown to 22 percent.

Democrats dominate voter registration rolls, but the state has swung back and forth between Republican and Democratic governors for decades. New Mexico's longest-running senator was Republican Pete Domenici, who served from 1973 to 2009.

Johnson's presidential prospects fizzled in 2016, two months before the election with his befuddled response to a television reporter's question about how to deal with a crisis in the war-torn Syrian city of Aleppo.

His reply — "What is Aleppo?" — earned him public derision.