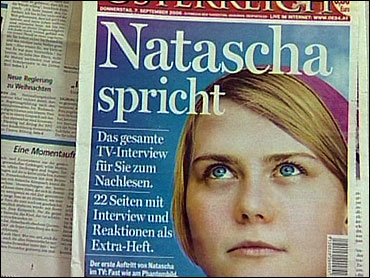 A young Austrian woman who was kidnapped and kept in a cell for more than eight years before she escaped has launched a Web site and will soon get her own television show.

Natascha Kampusch, who fled to freedom on Aug. 23, 2006, will become the host of a talk show that will be broadcast on new private Austrian television channel Puls 4, expected to start up next year, according to a statement released late Wednesday.

Puls TV Austria said Puls 4 will be launched in February. It was not immediately clear when Kampusch's show would begin.

Kampusch, now 19, plans to steer clear of traditional interview questions and will instead hold "very open" conversations with her guests, the statement from Kampusch's press representatives says.

Kampusch was 10 years old when she was kidnapped in Vienna on her way to school in March 1998. She was held for the next 8 ½ years by Wolfgang Priklopil, who largely confined her to a tiny underground dungeon in his home in a quiet Vienna suburb. Priklopil threw himself in front of a train just hours after Kampusch's dramatic escape.