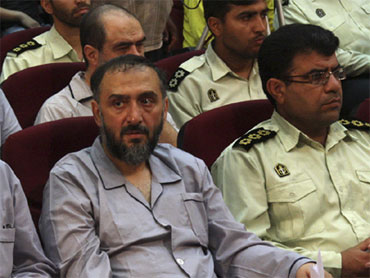 An Iranian court sentenced a former vice president to six years in jail as part of a mass trial of opposition figures accused of fomenting the unrest after the disputed June presidential election, the defendant's lawyer said Sunday.

Mohammad Ali Abtahi, who served as vice president during former President Mohammad Khatami's two terms from 1997-2005, is the most senior former official among the more than 100 people on trial since August. Khatami is now one of the leading figures in the pro-reform movement in Iran.

Last week, state television reported that five defendants in the mass trial have been sentenced to death and 81 got prison terms ranging from six months up to 15 years.

Abtahi made televised confessions after his arrest in which he admitted provoking people to riot. But his family and other opposition figures said the statements were coerced and similar claims have been made about other defendants' confessions during the trial.

Rights groups and opposition figures in Iran have criticized the court proceedings as a "show trial."

In the weeks following the June 12 election, the opposition led massive street protests that drew hundreds of thousands and supporters clashed with security forces. They claimed fraud after authorities declared President Mahmoud Ahmadinejad the winner of a second term, and the protests were the most serious internal unrest in Iran in the 30 years since the Islamic Revolution.

Iran's clergy-led establishment accused the protesters of trying to state a "velvet revolution." A harsh crackdown ended the demonstrations and a security sweep went far beyond rounding up just protesters on the streets, snatching up rights activists and journalists, as well as pro-reform politicians.

The government has stopped short of indicting the most visible opposition leaders, presidential candidates Mir Hossein Mousavi and Mahdi Karroubi, but there have been signs in recent weeks that could change. The opposition says Mousavi is the rightful winner of the election.

Abtahi's lawyer Saleh Nikbakht said he planned to appeal the verdict and he has 20 days to do so.

Iran has accused the defendants in the trial of a range of offenses from security violations, agitating against the Islamic Republic, violating law and order, damaging public and private property, and assaulting civilians and security forces.

Iran's Supreme Leader Ayatollah Ali Khamenei, who openly backed Ahmadinejad's election victory, has said it is a crime to question the legitimacy of the June vote.
By Associated Press Writer Ali Akbar Dareini