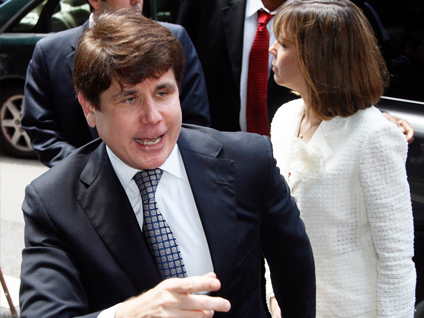 (CBS/WBBM/AP) CHICAGO - A federal jury found former Illinois Governor Rod Blagojevich guilty of 17 of the 20 counts he was accused of, including those related to trying to sell or trade President Barack Obama's old Senate seat and other corruption charges.

Blagojevich was found not guilty on one count of bribery related to an alleged shakedown of the Illinois Tollway. Jurors could not agree on two other counts of attempted extortion, one in connection with the Illinois Tollway and another regarding a school for which he was trying to get funds, reports CBS station WBBM.

Former Illinois First Lady Patti Blagojevich cried as the verdict was read for each count. The former governor himself sat expressionless.

The jury of 11 women and one man delivered their verdicts after deliberating for nine days. They had heard six weeks of testimony before they began their deliberations, including seven days of testimony from Blagojevich himself. The prosecution had presented a very streamlined case compared to the first trial last summer, presenting only three weeks of evidence, compared to about six weeks of evidence at the first trial.

Prosecutors said Blagojevich lied and the proof was on FBI wiretaps. Those included a widely parodied clip in which Blagojevich calls the Senate opportunity "f**king golden." Jurors in his first trial deadlocked on all but one charge, convicting Blagojevich of lying to the FBI. Prosecutors opted to try him again. Blagojevich already faces up to five years for the lying conviction.

According to the Chicago Sun-Times, Blagojevich could face up to 300 years in prison, but experts say his sentence is likely to be closer to 10 years.