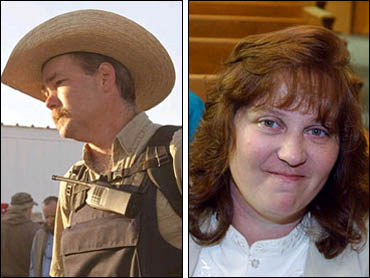 Former American hostage Thomas Hamill , who escaped his Iraqi captors after three weeks, was brought to a U.S. military hospital in Germany on Monday for a checkup and treatment of a gunshot wound.

"He's doing good, very good," said Marie Shaw, spokeswoman for the U.S. military's Landstuhl Regional Medical Center. "He's in the medical surgical ward. He should be able to go home by the end of the week."

Hamill, a 43-year-old civilian contractor, was expected to reunite with his wife, Kellie Hamill, at Landstuhl on Tuesday, officials said.

Hamill, of Macon, Miss., pried open the doors of the house where he was being held late Sunday morning and ran a half-mile to a U.S. military convoy passing by near the town of Balad north of Baghdad.

Hamill's relatives say he first tried to escape three days earlier. He heard a U.S. military helicopter and ran outside, but couldn't get the chopper's attention. He then went back to his room, before his captors noticed he was gone, reports CBS News Correspondent Mark Strassmann.

A truck driver for a Halliburton Corp. subsidiary, Hamill was captured April 9 by gunmen who blasted the supply convoy he was driving on the outskirts of Baghdad. Hamill's captors had threatened to kill him unless the United States lifted its siege on the city of Fallujah.

After Hamill broke out of the house, he removed his shirt, waved it and began shouting in English at the soldiers as he ran toward them, members of the patrol said at a briefing in Baghdad. At first, they said they thought he might be an Iraqi farmer.

"From a distance, it was obvious he was unarmed, so we did not have our weapons trained on him," Merrill said.

He added that Hamill did not say anything about being tortured.

Capt. George Rodriguez said aiding in Hamill's rescue "actually felt kind of good - something that I think everybody wants to do."

Hamill was brought to the U.S. military facilities hours before California Gov. Arnold Schwarzenegger was due to stop over on his way home from a Middle East trip to meet U.S. troops. It was not immediately known whether the two would meet.

A C-141 transport plane brought Hamill to the Ramstein Air Base in rural western Germany, from where he was taken to the medical center for a checkup, Shaw said.

The U.S. military has said Hamill is in overall good health, but the gunshot wound to his right arm might be infected.

Hamill's abduction came amid a flare-up of kidnappings of foreigners during the intense violence that began in early April. Up to 40 people from a wide range of nationalities were abducted, though most were later freed.

Hamill was among seven American contractors kidnapped in the April 9 attack. The bodies of four have been found, and two are missing.

A U.S. soldier kidnapped in the same convoy attack as Hamill, Pfc. Keith M. Maupin, was seen in separate video footage. The remains of a second military man missing in the attack, Sgt. Elmer Krause, were identified April 23.

Also missing are three Italian security guards kidnapped on April 12 as they took a taxi from Baghdad. A fourth Italian who was abducted with them was later executed.

Hamill's family exulted at the news of his escape. Leo Hamill said he fell asleep Saturday night while watching a television newscast and woke Sunday to a bulletin reporting his son's escape.

"I knew when I saw him on TV, I knew it was him," the teary-eyed father said. "I hoped they would return him safe."

His wife said she got a call at about 5:50 a.m. telling her that her husband was free. He later called home, "the best wake-up call I've ever had," she said.

"He sounded wonderful, so wonderful. He said he was fine," said Kellie. "He said he was more worried about his mom, his grandmother, me and our kids. The first thing he said to me was, 'How are you doing?'"

Kellie Hamill later went to church, where well-wishers greeted her with joyful hugs and tears.

"I don't think anyone in this group had given up," says Shirley Battle, a member of the choir at Calvary Baptist Church.

President Bush learned of Hamill's escape Sunday morning. "It's great news for all Americans, and the president is happy for Mr. Hamill and family," White House spokeswoman Erin Healy said.