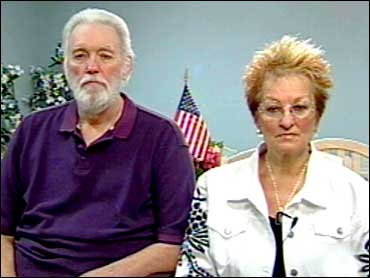 During the first Gulf War, more than 150 Americans were held hostage in Iraq. Now 12 years later, they finally have received the millions of dollars in frozen Iraqi funds awarded them by the U.S. courts.

The largest award, $1.75 million, went to Jack Frazier, an American oil worker who suffered irreparable health damage during the ordeal.

Jack Frazier today is a far cry from the ironworker who built oil refineries in Iraq in 1990. He became a hostage, kept with over 50 others at the American ambassador's residence. But inside, he was hurting. Literally.

"I never cried in the house. But I do all the time now," he says.

An Iraqi had stolen a bag containing Frazier's medicine for diabetes. So he says he went without his medicine at the ambassador's house "a little less than four months."

His wife, Deanna, says she sent the medication. "Time after time, it was confiscated by the Iraqis," she says.

Frazier was refused treatment. When he was finally freed, he said he felt great. It was anything but the truth. He'd lost sight in one eye, as the diabetes, left unchecked, was taking its toll.

"Saddam Hussein, in practical terms, didn't shoot me. But he killed me anyway. Because my health has deteriorated," Frazier says in the videotaped interview.

He has no doubt this deterioration is because of that captivity. "I went to numerous diabetes specialists, and they all said the very same thing: that without my medication, my diabetes accelerated," he says.

Deanna says she never thought she would see him in a nursing home. She says aside from the regular insulin shots, he now must take a laundry list of powerful drugs.

With a list of medications in hand, she says, "He needs a lot of this, two and three times a day. I would say Saddam has ruined both of our lives. And it started when he was a hostage in Baghdad."