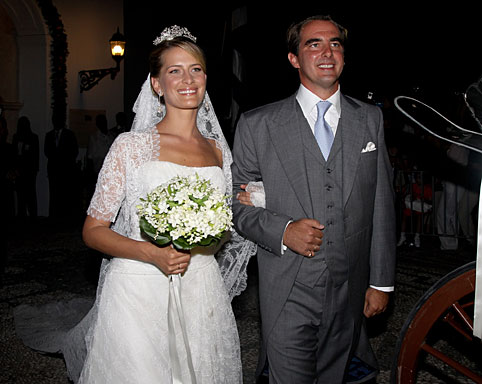 (CBS/AP) Prince Nikolaos, the second son of former King Constantine of Greece, married a fashion events planner on Wednesday in a ceremony on a southern Greek island attended by royals from across Europe.

Both bride and groom have ties to the U.K. and the U.S.

The prince's wedding to Tatiana Blatnik was held in a 17th Century cliffside monastery near the old port of Stepses island. Blatnik, 29, arrived in a horse-drawn carriage and waved to a crowd of well wishers gathered outside. The 40-year-old Nikolaos arrived by boat, accompanied by police and coast guard.

The Greek Orthodox service was attended by Spanish Queen Sofia, Constantine's sister, Crown Prince Felipe and his wife, Letizia. Members of royal families from Norway, Sweden, Denmark and the Netherlands also were present.

Ahead of the ceremony, the groom's parents, former King Constantine and former Queen Anne Marie, who is the sister of Denmark's Queen Margrethe, paid a last-minute visit to the church as trucks carried in ornaments and flowers.

"As you know, in all of these situations, even the last minute you are preparing," Constantine told AP Television.

The 70-year-old Constantine ascended to the throne in Greece in 1964, but he was formally deposed in 1973, during the country's 1967-1974 military dictatorship.

In 1974, after the restoration of democracy in Greece, its citizens voted in a referendum to abolish the country's monarchy.

About 350 guests attended the wedding; singer Elton John is reportedly among them.

Yachts began gathering in the harbor as early as Monday. And pre-wedding parties drew a glittery international crowd to the isle, about three hours by boat from Athens.

Nikolaos, 40, is a graduate of Brown University and works in his father's London office.

The 29-year-old bride was educated in Switzerland and the U.S. and is the granddaughter of Ellinka Countess von Einsiedel. They had been engaged since December

Kourtney Kardashian and Travis Barker get married
Thanks for reading CBS NEWS.
Create your free account or log in
for more features.
View CBS News In
CBS News App Open
Chrome Safari Continue
Be the first to know
Get browser notifications for breaking news, live events, and exclusive reporting.