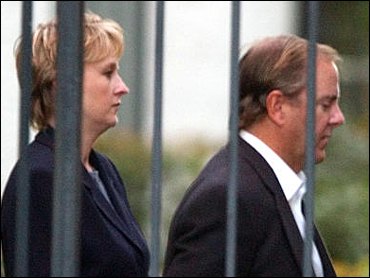 Almost exactly two years ago, Skilling bucked the trend of former Enron executives invoking their Fifth Amendment rights before Congress, telling two panels he knew nothing about serious problems at the energy trader before he quit after serving as CEO for only six months.

Skilling, flanked by a pair of attorneys, turned himself in at the Houston FBI offices just before daybreak. He was expected to appear later in the day before a federal judge on charges related to Enron's collapse, according to two sources close to the investigation who spoke on condition of anonymity.

"Under the circumstances, he is doing extraordinarily well," Dan Petrocelli, one of his lawyers, said.

Barring any last minute delays, Skilling, 50, would be the highest-profile former Enron executive to date to face criminal charges. He would be the 28th individual to be charged and one of the most anticipated in the Justice Department's methodical investigation, which passed its two-year mark last month.

Another of his lawyers, Bruce Hiler, visited the federal courthouse in Houston Wednesday afternoon to familiarize himself with its layout.

"Skilling had to know that this was in the works, especially after Andrew Fastow, Enron's former CFO, cut a deal last month with the feds. Skilling has already put together a sharp defense team. He's using Ron Woods, a Houston lawyer who represented Oklahoma City bombing conspirator Terry Nichols, and Daniel Petrocelli, who did a wonderful job in the O.J. Simpson civil case," said CBSNews.com Legal Analyst Andrew Cohen.

"Skilling's surrender means that the investigation is almost to the top of the Enron pyramid, about as close to the top as you can get, with only Kenneth Lay himself now left to go after. And I think we'll know soon whether Lay will be indicted because either Skilling will be able and willing to turn on his former boss or he won't," said Cohen.

The sources said it was unclear when or if Lay would become a defendant.

Both men, through their lawyers, have staunchly maintained their innocence of any wrongdoing related to Enron's failure.

It was not immediately clear what charges Skilling would face, although the sources said they likely would be similar to conspiracy and fraud counts filed last month against former top Enron accountant Richard Causey.

Two years ago, Skilling insisted during testimony before two congressional panels that he believed Enron was financially healthy when he stepped down, citing personal reasons he has not explained.

Charges against Skilling would come just a month after former Enron finance chief Andrew Fastow pleaded guilty to two counts of conspiracy and agreed to help prosecutors pursue other cases.

Fastow, one of Skilling's first hires after Skilling joined Enron in 1990, admitted that he and others manipulated Enron's books so the company would appear successful while using various partnerships to enrich himself, his family and chosen colleagues.

Fastow's lawyers said when he was indicted on nearly 100 counts in October 2002 that he was hired to do off-the-books financing and that Enron's top officers and directors approved and praised his work.

Causey and Fastow reported directly to Skilling. Causey pleaded innocent and, unlike Fastow, is not accused of skimming millions of dollars for himself through shady self-dealing.

But top executives, including Skilling, pocketed millions of dollars from sales of stock prosecutors allege was inflated. The main action in a conglomerate of federal shareholder lawsuits in Houston alleges Skilling gained more than $70 million from selling 1.3 million shares of stock — about 43 percent of his holdings — from June 1996 through November 2001. Skilling also received $13.2 million in bonuses from 1997 through 2001.

Skilling has said his stock sales were part of an ongoing program to sell a certain amount each month, and he didn't dump shares for fear of Enron going under.

Skilling graduated from Southern Methodist University in Dallas, earned an MBA from Harvard Business School and joined consulting firm McKinsey & Co. in Houston in 1986. His theory of applying finance principles to trading in the newly deregulated natural gas business led Lay to hire him.