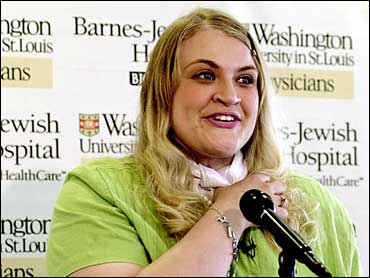 The 26-year-old former disc jockey discovered Monday that she can speak again, after surgery last month succeeded in restoring the voice she hasn't had since losing her larynx to cancer five years ago.

The operation was the first of its kind in the United States, though it has been performed in Germany.

"It's worth everything now, all the staples and surgeries," Hancock told a roomful of family members, medical staff and reporters gathered at the Barnes-Jewish Hospital Center for Advanced Medicine.

Hancock's voice was low and raspy, but her words were clear.

Paniello fashioned a patch of skin into a breathing tube to pull off the surgery. The doctor explained that Hancock still has no vocal cords and will not make clear, continuous sound. She, however, can speak as often as she wants and, with work, should improve to where her voice will sound hoarse.

Hancock's family members beamed as she spoke without the electrolarynx, a device that produced vibrations, and her mother said she couldn't wait to have a conversation with her daughter.

"Anything she wants to talk about, I'm willing to listen," said Mary Anne Pittman. "She had a beautiful voice, it just flowed out of her like it was meant to be, and it will again."

During the surgery May 23, Paniello transformed a 2-inch-by-2-inch patch of skin from Hancock's left arm into a breathing tube, which he inserted into her trachea. He then inserted the skin tube to reconnect her trachea and esophagus.

Hancock, who now works in the membership office of the Missouri Botanical Garden in St. Louis, uses her thumb to block the open trachea to talk, forcing air through the tube into the oral cavity. She'll have another procedure to place a valve in her trachea, which should mean she won't need to use her thumb to speak.

When asked if Hancock will ever sing, Paniello said, "She has my blessing to try."

"I thought we were going to karaoke," she joked.

"You first," he responded.