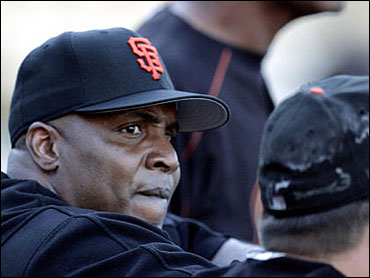 Former commissioner Fay Vincent and the lawyer who investigated Pete Rose for him called on commissioner Bud Selig to hire an outside investigator to research allegations of steroid use by Barry Bonds.

"I think he should hire somebody like John Dowd or set up a committee," Vincent said Thursday in a telephone interview. "He needs to do that, maybe headed by Mario Cuomo or George Mitchell, somebody of that ilk."

Vincent hired Dowd in 1989 to investigate Pete Rose, who agreed to a lifetime ban from baseball after it was found that he bet on the Cincinnati Reds. Rose publicly admitted in 2004 that he did bet on the Reds while he was the manager.

Bonds is accused in an upcoming book of using steroids, human growth hormone and insulin for at least five seasons beginning in 1998, according to Sports Illustrated, which published excerpts this week. Baseball did not ban performance-enhancing substances until after the 2002 season.

"If you do nothing, you leave a cloud on the game." Dowd said. "What needs to be done is a fair, honest, thorough investigation of the facts. Then you go from there."

CBS News correspondent Bill Whitaker reports Thursday as though it were any other spring day, snarling at the press in his usual way.

Speaking Wednesday, Selig wouldn't commit to an investigation, saying only: "I will review all the material that's relative in every way." He said baseball will await publication of the book, "Game of Shadows," which is due out March 23, then decide how to proceed.

"One of the first things to do is talk to Bonds," Vincent said. "Will he cooperate? If he doesn't, I think that leads to disaster for Bonds. The union would make a big mistake by being too defensive here. Congress could step in."

Under pressure from Congress, the union agreed to toughen drug testing rules and penalties for 2005 and again this season.