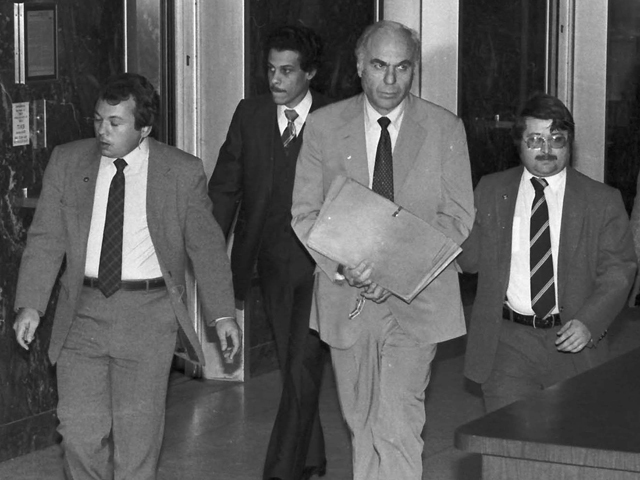 (AP) SEATTLE - Edwin P. Wilson, a former CIA operative who was branded a traitor and convicted of shipping arms to Libya but whose conviction was overturned after he served 22 years in prison, has died. He was 84.

Wilson who set up front companies abroad for the CIA and posed as a rich American businessman was convicted in 1983 for shipping 20 tons of C-4 plastic explosives to Libya. At trial, he said he did it to ingratiate himself with the Libyan government at the CIA's request.

A federal judge threw out that conviction in 2003, saying the government failed to correct information about Wilson's service to the CIA that it admitted internally was false.

Wilson had been sentenced to 52 years in prison for selling arms and explosives to Libya in the late 1970s and early 1980s, and for other crimes.

He served 22 years in prison, mostly in solitary confinement, until he was released in 2004. He then moved to Edmonds, Wash., north of Seattle, to live with his brother.

While in prison, he sought to prove his innocence by using the Freedom of Information Act to request government documents.

Even after he was released, the man once described as a "death merchant" and "terrorist" worked to clear his name.

"I can't think of one thing I did that I have any guilt about," Wilson told seattlepi.com in a 2006 interview. "I didn't hurt anybody. I didn't get anyone killed."

Wilson filed a civil lawsuit against seven former federal prosecutors and a former executive director of the CIA, but a judge in Houston dismissed the case in 2007, according to Seattlepi.com.

Wilson was born May 3, 1928, to a farming family in Nampa, Idaho. He worked as a merchant seaman, and earned a psychology degree from the University of Portland in 1953. He joined the Marines and fought in the last days of the Korean War, according to his death notice. He went to work for the Central Intelligence Agency in 1955 after being discharged from the Marines.

After leaving the CIA in 1971, he made millions in the arms trade and bought a sprawling farm in a tony county of Northern Virginia, where he entertained generals, CIA officials and congressmen, according to a 2004 Washington Post article.

"I had a couple of villas that were very, very nice," he told the Washington Post at the time. "I had Pakistani houseboys and I had Libyans working for me, typing up proposals in Arabic."

In 1982, he was lured out of hiding in Libya and brought to New York for arrest.

A federal court in Virginia convicted him of exporting firearms to Libya without permission and sentenced him to 10 years. He was convicted in Texas in 1983, receiving a 17-year sentence for similar crimes.

A New York court sentenced him to 25 years, to run consecutively with the Texas and Virginia sentences, for attempted murder, criminal solicitation and other charges involving claims that Wilson conspired behind bars to have witnesses and prosecutors killed.